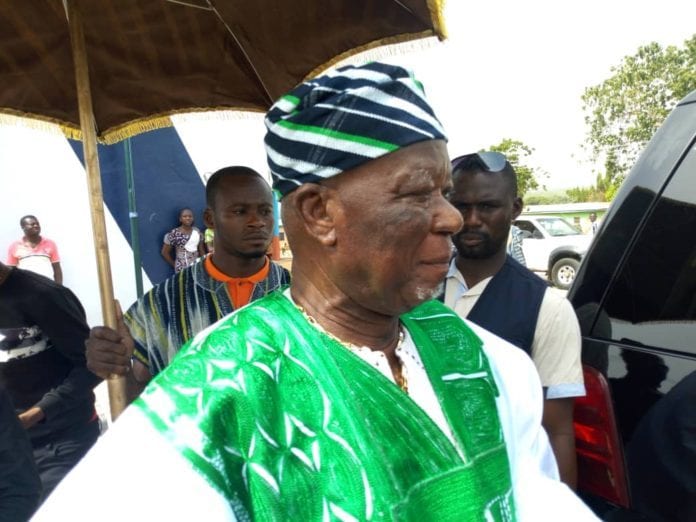 The Gonjaland Traditional Council on Thursday announced a decision punishing traditional authorities of the Kpembe paramountcy for the violent protest that erupted in Salaga following the naming of Damongo as the administrative capital of the Savannah region.

The decision was based on investigations conducted by the council into the incident which occurred over a week now at a small portion of the Salaga Township by a group of dissatisfied members of the ruling NPP.

The group on Tuesday, February 12, almost immediately after President Akufo-Addo presented the constitutional instrument backing the creation of new regions at a ceremony in the Jubilee House, took to the squalid streets of the ancient town and vented their disappointment on the NPP installations and properties.

The party office building for that constituency was completely torched and many party assets damaged in the unrestrained rampage by the disgruntled youth. 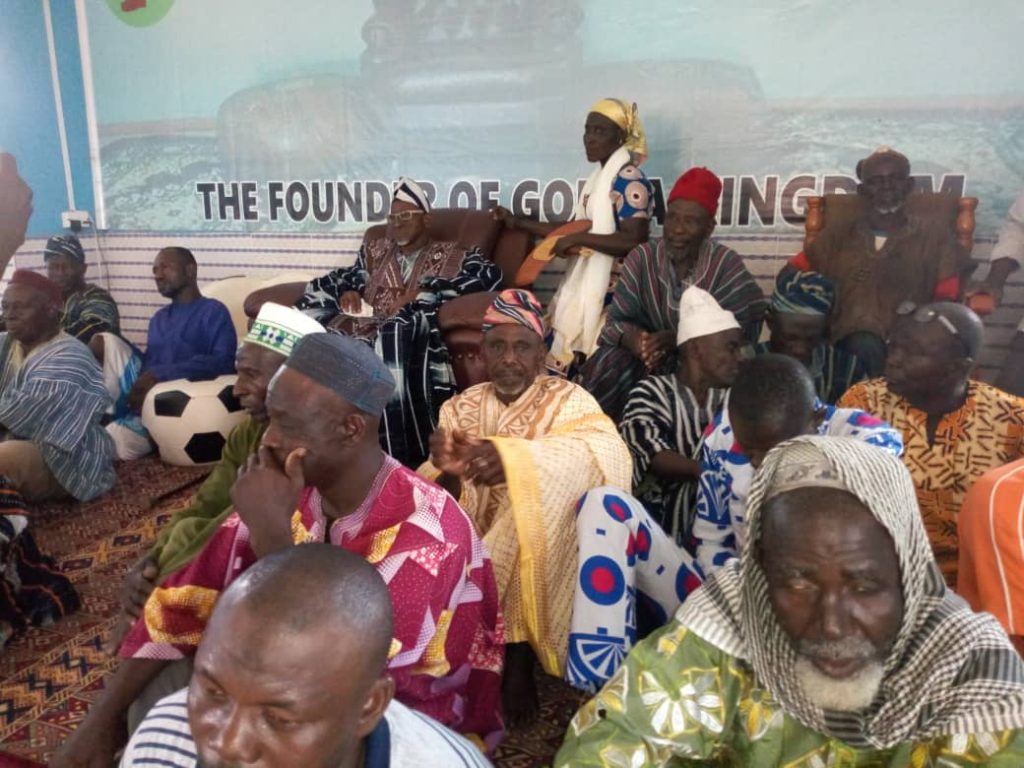 Seven suspects were later arrested in connection with the mob action but have since been released without any charges.

The action sparked a wave of widespread anger and condemnation from authorities and individuals in the Gonjaland and beyond, causing the traditional council to initiate a probe into the action of the youth and conduct of the traditional authorities.

Announcing the verdict at a traditional council meeting, opened to the public, at the Jakpa Palace in Damongo, the Vice President of the Gonjaland Traditional Council and Chief of Buipe, Buipewura Abdulai Jinapor II said, the council has punished the paramount chief of Kpembi to pay a sum of GH¢2,000 and two male goats for the action it says has disturbed President Akufo-Addo and some Gonjaland politicians in government.

Buipewura also announced plans are underway for the Yagbonwura to send a delegation which would be led by the National Chief Imam to the Jubilee House on Tuesday to render a remorseful apology to the President.

Buipewura added that the cost of organizing this journey would be born by the Kpembewura and his elders, as part of the sanctions against the unruly conduct by the Salaga youth towards the decision of the President, which is being treated by the Ndewura Japka Palace as a serious offence.

The Kpembewura was again charged to ensure the immediate renovation of the burnt party office and replaced other damaged installations of the party and properties of private individuals affected in the unrestrained rampage by the disgruntled mob who were armed with lethal local weapons.

Lepowura Alhaji M. N. D Jawula who was in this extraordinary meeting begged the Yagbonwura for clemency towards the Kpembe people.

The Buipewura responded to the plea, saying the council took into consideration an apology from the Kpembe Traditional Council before concluding on the sanctions imposed.

He also clarified that the Kpembewura was cleared of having no connection with the violence but he was held responsible because the incident occurred in his jurisdiction.

The Kpembewura, Ndefuso Bismark Haruna Babage IV who was present at this meeting and totally under fire was not given an opportunity for comment, but he spoke to the press after he was discharged.

He said he felt “relieved” to have a higher platform to render his apology to the president, who he called a very good confidante, and said he happily accepts the punishments and would comply in earnest.

“I still render my unqualified apology to everybody in Gonjaland and especially the President,” he said in an interview with StarrNews.

“I learned when this news came, he wasn’t happy because he is a very good confidante of mine and also, since that day, not happy, but today, I have a little bit of relief because my overlord is trying to put things in order for us to move forward and see how we can contribute to the Savannah Region”, he said, with a conclusion that “what has happened is unfortunate”. 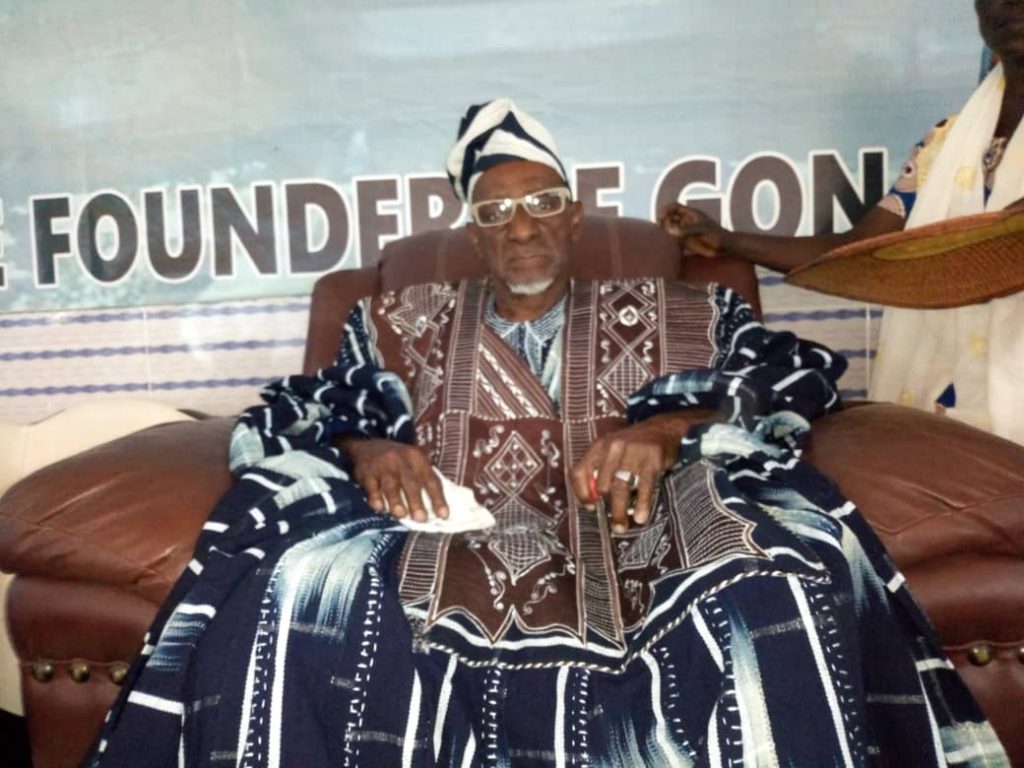 The Regional Commander was offered the opportunity to address the gathering and he presented a lengthy congratulatory speech to the chiefs and people of the Gonjaland.

DCOP Timothy spoke on multiple security subjects all relating to peace and development.

“The region has been created to speed up development but we all know that development cannot take place when there is no peace,” the commander said.

The DCOP went ahead to define the meaning of security and spoke about how population increase and the quest for development have affected the cost of ensuring security in our localities.

“I’m saying that when population increase other vices too increase. We have gotten our new region, and I’m saying that it’s one of the most attractive newly created regions, and we will relocate to Savannah Region.

The police commander warned that violence relating to land is likely to increase with the creation of the new region and cautioned chiefs and landowners to avoid multiple sales of land properties to distinct entities that could trigger litigations.

He also spoke about the landguard menace in Accra and other several parts of the country and proposed to the traditional leaders to review the process of land acquisition to include Town and Country Planning office into the protocol.

“The Town and Country Office would be responsible for the uncluttered layout to avoid choked settlements as the new region begins to take shape,” he said.

The Police commander bemoaned the increasing rate of highway robbery in the Savannah Region, blaming a lack of logistics for the security’s slow approach.

All notable chiefs in the Gonjaland including the Tuluwewura, Kasawguwura, Kpembewura and dozens of regional politicians and seminal figures were in this meeting.

The Buipewura later read a press statement condemning the Salaga violence and reinforcing gratitude to the president for granting their request for the Savannah Region.

He assured the president that measures have been strictly applied to avoid the repeat of the unfortunate incident.

The gathering regrouped later to discuss plans to organize an out-dooring ceremony for the Savannah Region, where the Yagbonwura is expected to make critical remarks on how he intends to play the role of a father for-all despite the numerous chieftaincy disputes around.

Some members of the gathering proposed a seven-member committee be tasked with a plan and execute the event.

A date was yet to be fixed for the event.

Explosive truck had no escort – Chief

Fameye made chief in Wassa (WATCH)