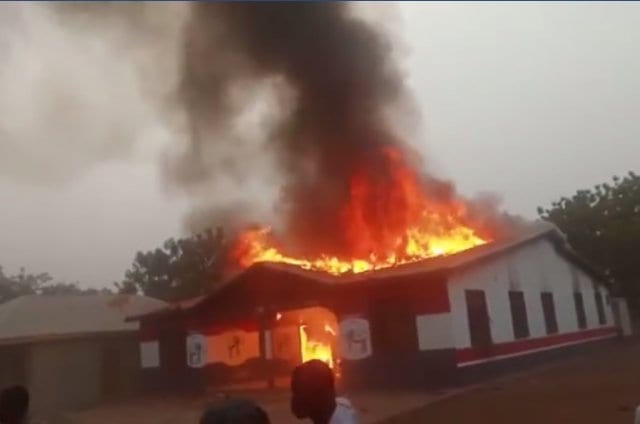 Deputy Chief of Staff, Samuel Abu Jinapor has warned that the police will deal with perpetrators of violence in Salaga on Tuesday following President Akufo Addo’s naming of Damongo as the capital of the newly created Savannah Region.

Rioting youth took to the streets after the announcement and burnt the offices of the ruling New Patriotic Party(NPP) to show their displeasure. The incensed youth were seen destroying everything including billboards that had the picture of President Akufo Addo.

They insist Salaga deserved to be the regional capital and not Damongo.

They argued the people of Salaga South showed faith in the New Patriotic Party by voting the party’s parliamentary candidate Salifu Adam Braimah as MP.

But Deputy Chief of Staff, Samuel Abu Jinapor stated that there’s no justification for the destruction of properties and called on the security agencies to deal with the perpetrators.

“The law enforcement agencies should bring to perpetrators to book when they break the law regardless of what motivated them to do so. We can only site a regional capital in one town, we cannot have two or regional capitals and so one town will certainly have to be selected over other towns which were in the offing.

People in the Savanna area of the Northern Region voted massively in support of the creation of the new region were a total of 206,350 YES votes representing 99.7 per cent and 647 NO votes representing 0.3 percent out of the total votes cast of 207,343. Only 346 votes were rejected.