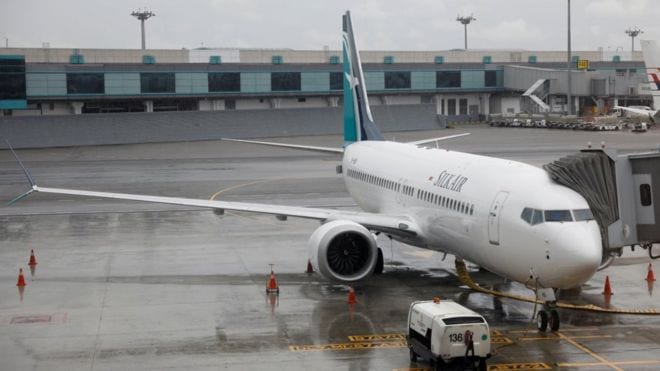 Singapore’s Civil Aviation Authority (CAAS) has temporarily suspended all versions of the Boeing 737 Max from flying into and out of the country.

The decision comes after an Ethiopian Airlines Boeing 737 Max 8 crashed on Sunday. All 157 people on board died.

It was the second fatal accident involving that model in less than five months.

Changi airport, in Singapore, is the sixth busiest globally, but it is unclear if flights will be cancelled.

Several airlines and regulators around the world have already grounded the Max 8 model following the crash.

Singapore is believed to be the first country to ban all variants of the Max family of aircraft. The suspension goes into effect from 14:00 local time (06:00 GMT).

The aviation authority said it was working with Singapore’s Changi Airport Group and the airlines to minimise the impact on passengers.

In the US, the country’s Federal Aviation Administration told airlines on Monday it believes Boeing’s 737 Max 8 model to be airworthy, despite the two fatal crashes.

The Ethiopian Airlines plane was en route from Addis Ababa to Nairobi when it crashed six minutes after take-off, killing all passengers and cabin crew.

The incident followed a Lion Air 737 Max 8 crash in Indonesia that killed 189 people in October 2018.

The Boeing 737 Max family of aircraft are the latest iteration of the company’s successful 737 line. The group includes the Max 7, 8, 9 and 10 models.

By the end of January, Boeing had delivered 350 of the Max 8 model out of 5,011 orders. A small number of Max 9s are also operating.

The Max 7 and 10 models, not yet delivered, are due for roll-out over the next few years.

The Max 8 that crashed on Sunday was one of 30 ordered as part of Ethiopian Airlines’ expansion. It underwent a “rigorous first check maintenance” on 4 February, the airline said.

Following last October’s Lion Air crash in Indonesia, investigators said the pilots had appeared to struggle with an automated system designed to keep the plane from stalling, a new feature of the jet.

It is not yet clear whether the anti-stall system was the cause of Sunday’s crash. Aviation experts say other technical issues or human error cannot be discounted.

US aviation officials have said the 737 Max 8 is airworthy and that it is too early to reach any conclusions or take any action.

US Transportation Secretary Elaine Chao on Monday said the FAA would “take immediate and appropriate action” if a defect was found in the Max 8.

Boeing has confirmed that for the past few months it has been developing a “flight control software enhancement” for the aircraft.

Paul Hudson, the president of FlyersRights.org and a member of the FAA Aviation Rulemaking Advisory Committee, nonetheless called for the plane to be grounded.

“The FAA’s ‘wait and see’ attitude risks lives as well as the safety reputation of the US aviation industry,” Mr Hudson said in a statement on Monday.

There were people of more than 30 nationalities on the 10 March flight, including 32 Kenyans, 18 Canadians, nine Ethiopians and nine Britons (two of whom were dual nationals travelling on non-British passports).

Among the Canadians was a family of six, originally from India. Kosha Vaidya, 37, and her husband Prerit Dixit, 45 were taking their 14-year-old daughter Ashka and 13-year-old daughter Anushka to Nairobi – where Kosha was born – along with her parents, Pannagesh Vaidya, 73, and Hansini Vaidya, 67.

At least 21 passengers were affiliated with the UN and were travelling to a session of its Environment Assembly in Nairobi.

“It is one of the biggest catastrophes we have had in years,” Michael Moller, director-general of the UN Office in Geneva, told the session on Monday.