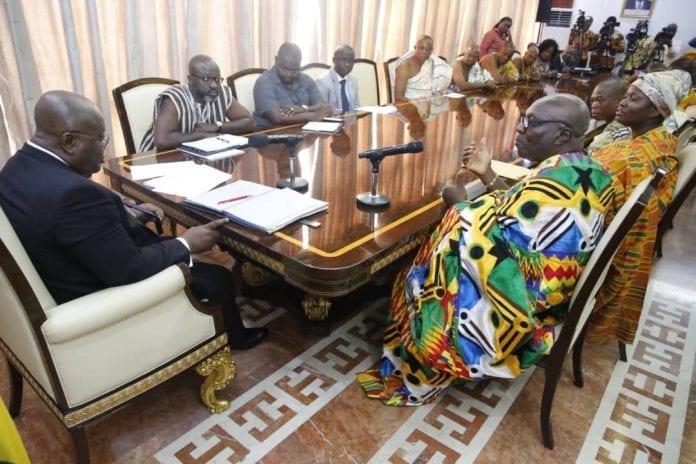 Chiefs and leaders of the Vakpo Traditional Area wants President Nana Addo Dankwa Akufo- Addo, to initiate the process that would lead to the creation of Central Dayi District out of the current North Dayi District.

A delegation of traditional authorities from Vakpo Traditional Area in the North Dayi District led by Togbega Gbogbolulu V, Paramount Chief of the Vakpo Traditional Council, relayed the request on behalf of the people when they paid a courtesy call on the President at the Jubilee House, today the 20th of March, 2019.

“We are today making a special plea to you for the creation of a Central Dayi District Assembly out of the North Dayi Assembly with Vakpo as its capital.”

The Central Dayi Assembly, he added, is warranted because firstly, “the population in the Central Dayi area is huge and qualifies for a separate Assembly.”

Secondly, he espoused that Vakpo has a huge expanse of land to support the establishment of all requisite infrastructure for the district. Thirdly and “rather sadly”, he noted that Vakpo was bypassed as the capital for the North Dayi District Assembly because the people of Vakpo and its chiefs supported the New Patriotic Party and in particular, the President, Nana Addo Dankwa Akufo Addo, Togbega Gbogbolulu V, told President Akufo Addo in making his case for the creation of the Central Dayi District.

The delegation also requested the President to consider establishing a food processing factory in Vakpo, in order to allow for the processing of the large quantities of garden eggs, mangoes and cashew nuts that are harvested in the Vakpo Traditional Area but go waste due to the lack of a processing facility.

The chiefs also asked government to consider constructing a bridge over River Dayi. “In consideration, your Excellency, we are making a passionate appeal to you to consider the construction of a bridge on River Dayi to link Dogbega which is our major farm land to villages and other settlements across the river,” Togbega Gbogbolulu V said.

President Akufo Addo in his submission to the delegation said he was very grateful to them for their visit to the Jubilee House. He assured them that they had a good advocate in him and he would do his best to get them all that they had requested.

“To the people who vilified you and abused you for supporting NPP, they say in this world, every dawn has a day, so your day too has come. Obviously we have to see what we also can do to reciprocate,” President Akufo Addo said.