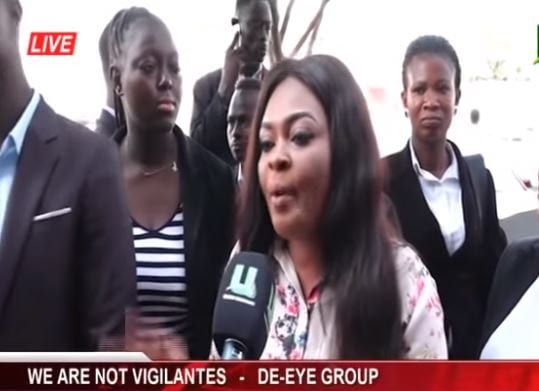 De-Eye group, alleged to be a militia group affiliated to the ruling New Patriotic Party(NPP) has vehemently denied the claim, questioning how such beautiful young ladies who are members of the group could be recruited as vigilante or militia.

Activities of De-Eye Group was brought to the attention of the general public through a documentary by Joy FM journalist Manasseh Azure, who captured the alleged militia group meeting and operation from the Christianborg Castle, a place which used to be the seat of government.

The Secretary of De-Eye Group, Tracey Asamoah in an interview with host Kwaku Owusu Adjei on Anopa Kasapa on Kasapa FM, stated that the group is law-abiding and harmless contrary to the erroneous perception created about them.

“We have nice graduate ladies as members of De-Eye group, I’m sure you saw some of these ladies in the video, which part of Ghana do we use ladies as militia or vigilante?

We the ladies in this company will not jeopardize our lives because of a certain party we love our lives and we’ll do everything lawful to keep. We are not lawless people. We only want jobs that’s why you see us in there.”