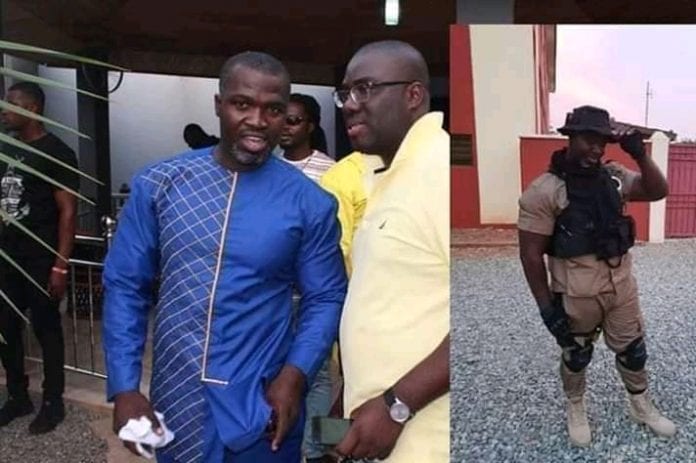 National Organizer of the ruling New Patriotic Party(NPP) Sammi Awuku has vehemently denied ever recommending verbally or written the recruitment of Bright Akomea aka ‘Double’ into the National Security.

According to him, though he’s known ‘Double’ for nearly 12 years he absolutely had no hand in the security operative getting the job in such a sensitive pinstitution.

There have been allegations that ‘Double’ who was an active participant in the violence at La-Bawaleshie Presby Polling station during the Ayawaso West Wuogon by-election used to be Sammi Awuku’s bodyguard and used his influence to get him employed in the security agency.

‘Double’ caused a stir on social media after he revealed to the Emile Short Commission probing the electoral violence that he was hitherto a mobile phone seller before he was recruited in the National Security.

What got Ghanaians outraged and talking the more was the fact that he as a national security operative appeared before the Commission with an interpreter suggesting he lacked the ability to speak English and gave his testimony in the local dialect, Twi.

But Sammi Awuku in an interview with sit-in-host Akwasi Nsiah on Anopa Kasapa on Kasapa FM stated that ‘Double’ is educated and currently schooling in a tertiary institution in Accra, but he may have good reasons why he chose to speak in vernacular.

“I found it laughable and it exposes the ignorance in the system when I read people on social media making fun that a mobile phone repairer has been recruited into the National Security. National Security sometimes hires the services of all manner of persons including cripples and shoemakers as operatives. It is about the sort of work the security outfit wants the person to do, hence they employ such persons. One may not be necessarily educated with a degree before that person can be recruited into the National Security.”

Awuku added: “When you don’t understand the work of National Security, you will question their modality and how they deploy these people. That’s why they are trained as spy agents. Let’s not underestimate people on the basis that they are not educated. ‘Double’ speaks English, but maybe he chose to be cautious and spoke in a language that he’ll be very comfortable when he appeared before the commission of inquiry which has the powers of a High court and also a commission of records. Anything you say can also be used against you in the court of law. So if I were him, and I’m comfortable with the Dagbani language I would have spoken that so that I’ll be free. I know ‘Double’ speaks English, I can also tell you that currently, he’s schooling in a Tertiary Institution here in Accra.”