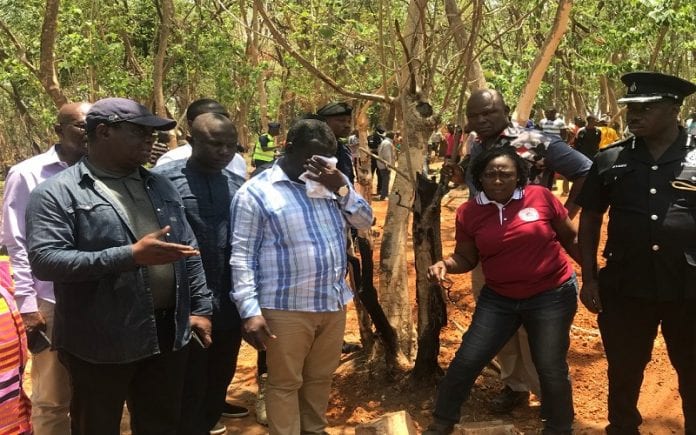 A sober-looking Minister for Transport, Hon. Kwaku Ofori Asiamah, could not control himself any longer than to shed tears after visiting the mass burial site of 38 victims of last Friday’s Kintampo road crash who were burnt beyond recognition.

He was, however, consoled by his colleague Minister for Roads and Highways, Hon. Kwasi Amoako Atta, who accompanied him to the site.

Hon. Amoako Atta though looked very strong, he at a point in time also became restrained and emotional after listening to some of the accident victims narrate their story and attributed the road crash to the reckless driving of the KIA Grand Bird driver. 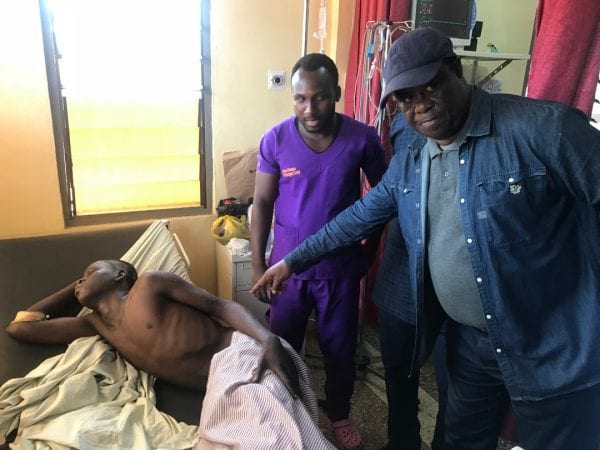 This was when they visited some of the accident victims at the Techiman Holy Family Hospital and the Kintampo South District Hospital on Tuesday, March 26, 2019, to commiserate with them and also get firsthand information from them.

The two ministers who were accompanied by the Executive Director of the Ghana National Road Safety Commission (NRSC), Ing. May Obiri Yeboah and personnel from both Techiman and Kintampo Police Commands, also visited the accident scene at Ampomakrom in the Kintampo South District. 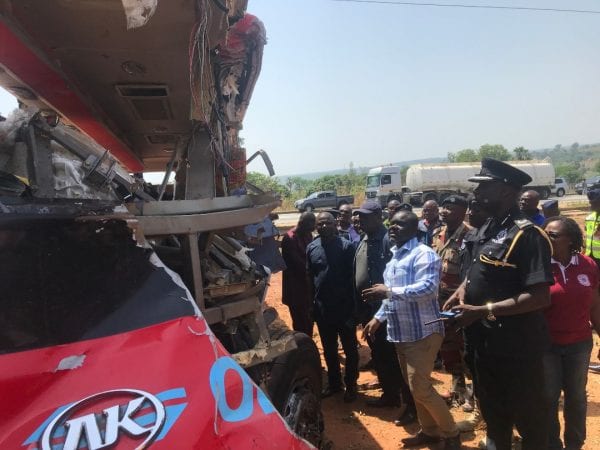 The team had on Monday, March 25, 2019, embarked on a similar mission where they visited victims of the Ekumfi road crash which also happened on the same Friday, March 22, 2019, at Trauma & Specialist Hospital, Winneba and the St. Luke Holy Family Hospital, Apam, as well as the accident scene.

The driver of the KIA Grand Bird, according to the narration of the surviving victims, was over speeding and at a point dosing off, disregarding all the numerous calls from the passengers onboard to slow down.

He in the process veered off his lane and collided head-on with an incoming VVIP bus with registration number GT 3916 – 17 which was traveling from Accra to Tamale.

The Grand Bird bus, on the other hand, was traveling from Garu Tempane to Kumasi.

“We were coming from Garu and somewhere along the line, we saw another vehicle climbing the hilly road. Our driver over sped to reach that vehicle and at a point in time tried overtaking it. From there, he continued over speeding and when you caution him to exercise restraint, he tells you that he wants to pick some market women who trade in okro and were waiting for him. He even told us those who could not withstand the speed at which he was traveling could get off the vehicle. So after crossing the Police barrier, I saw him dozing off and veered off the road but it was too late to save the situation. Our bus in the process, run into the incoming VVIP bus causing this avoidable accident”, Ernest Atabila, one of the victims narrated the cause of the accident to the team lead by the Transport and Roads and Highways ministers.

Ramatu Issaka, a 54-year old woman, who lost her three grandchildren who were also onboard the KIA Grand Bird bus also said “We cautioned the driver several times against over speeding but he didn’t listen to us. We had no choice than to keep quiet and pray that he takes us to our destination. Just some few kilometers after crossing the barrier, he run into the other bus after veering off his lane”.

The narration of the road crash victims was corroborated by the Kintampo Divisional Police Commander, ACP Joseph Gyawu.

A visible sober looking Hon. Asiamah, interacting with journalists after visiting the road crash victims, said he is completely shocked and devastated after listening to the narration of the victims and urged the citizenry to take the security and safety of their lives into their own hands by cautioning over speeding drivers to slow down when onboard their vehicles.

He said indiscipline on the country’s road networks, especially, the highways, is killing so many lives and it was about time to end the phenomenon.

“Please join us to educate the citizenry about security and road safety on our roads because so many lives are being lost. You know for a fact that today, the number one killer disease is no more malaria – it is road crash. And so, we now have to take our destiny into our own hands”, he noted whilst addressing Rev. Sister Catherine Osei, deputy Director of Nursing at Techiman Holy Family Hospital.

He also urged the Police to up their game and map out new strategies that will help them to strictly enforce regulations covering road safety in the country.

“I know that you are doing your best but seeing and knowing what is happening to us, all of us must up our game and see that wherever we are having lapses and allowing these reckless drivers to behave the way they are behaving, we try to tackle it so that they don’t capitalize on the loose points and misbehave”, he said.

Rev. Sister Catherine Osei, on her part complained bitterly about none adherence on the part of drivers to road safety rules despite the numerous road safety educational campaigns they’ve mounted to sensitize the drivers and other road users.

“Today, people are not dying because of diseases. The number one killer had to do with road crashes. In our part of the world here in Techiman, we’ve been educating road users’ every day about the wearing of helmets and adherence to other road safety regulations but they don’t take the advice. So, like you have just said we all have to do our best to reduce the carnage on our roads”, she noted.

He said it was about time to confront reckless drivers with punitive measures, believing that measure will help reduce to the barest minimum if not totally eliminate, the incessant road crashes the country has been witnessing lately.

To him, the National Road Safety Commission (NRSC) ought to be commended for intensifying their sensitization and educational campaign from last year to date rather than to be castigated.

“Look at the road, it’s a straight road and the road line markings are there. Other necessary road furniture are all there and you can vividly see them. All the road signs have been mounted and please, the media, let the public understand this that through a comprehensive research by the NRSC, it has been revealed that more than 80% of road crashes are caused by human error. Commander you even said it that the Police despite all the state authority vested in you, when you stop these buses to even check them they don’t stop. We should let our people understand and I can assure you that we will do whatever is possible to stop this indiscipline on our roads. Today, because of one person’s recklessness, we have lost 59 lives including children and several others injured. This cannot be allowed to continue”, he noted.

According to the Police, 59 lives have so far been lost through the Kintampo road crash out of which 39 got burnt.

53 people from both buses survived the road crash.

Some of the surviving victims who were taking to the various hospitals in the enclave have been treated and discharged.

Four dead bodies are still in the Kintampo South District morgue and are yet to be identified by their relatives, according to the Medical Superintendent of the Hospital, Cornelius Atso Blekpi.