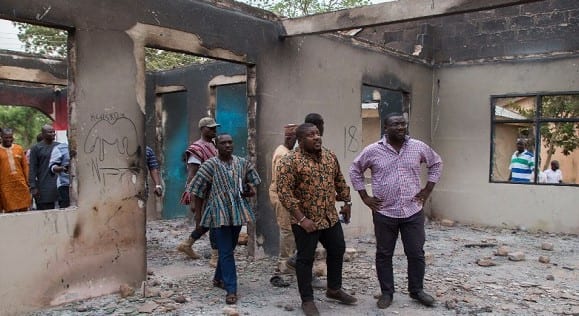 Charismatic National Organiser of the ruling New Patriotic Party(NPP) Sammi Awuku has revealed that party youth in Salaga who burnt down party office will be levied to raise funds to rebuild the facility.

Sammi Awuku and his team of Organisers at the National Level who have been touring the various constituencies in the Upper West, Upper East, North East, Northern and the Savanna Regions descended heavily on hundreds of youth who had come to welcome him upon hearing of his visit.

He minced no words in describing the incident as an act of barbarism and cautioned the youth to refrain from the use of violence at the least misunderstanding.

“Last year you had the most beautiful Party office when I visited, but today sadly you have become homeless and officeless due to your actions, the Party frowns on these acts and we will ensure all those involved are dealt with, In politics we all must make compromises one way or the other.. you burnt your Party office because Salaga was not named the Regional Capital, meanwhile the President has other plans for you and has shown you Grace by appointing your MP as Regional Minister.”

Speaking to host Kwaku Owusu Adjei on Anopa Kasapa on Kasapa FM, Sammi Awuku stated that the youth will be made to contribute towards the building of the burnt office to pay for their act of vandalizm.

“I told the youth at Salaga that each will be made to pay from GHC2.00 to GHC5.00 in a bid to raise funds to rebuild the burnt party office. When we are buying sand and water, they will contribute, when we are buying cement they will also buy their share. I’ve also warned them that at no point in time should they vent their anger at any NPP facility. I’m very sad about the burning of that party office because it was one of the beautiful party office up North but today they are homeless.