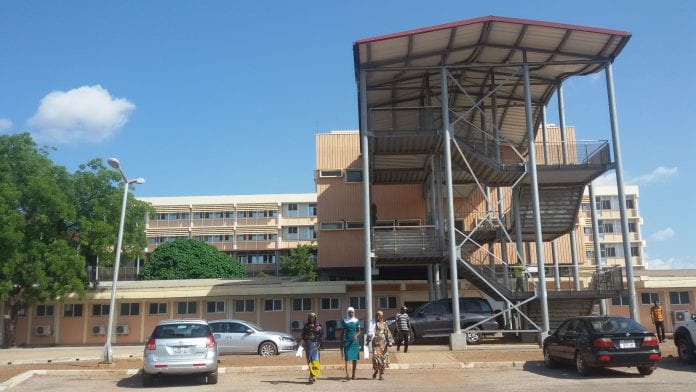 A frustrated pathologist at the Tamale Teaching Hospital went on rampage at the mortuary department on Thursday, verbally attacking pressmen, acting hostile towards relatives of deceased and physically punching the chest and shoulder of an aged mortuary worker.

Dr. Delle outrageously emerged from his office and came straight to the front-desk of the facility where the beaten staff was engaging pressmen who had visited the hospital to follow up on a strike earlier declared by mortuary workers at public hospitals across the nation.

The Mortuary Workers Association of Ghana laid down their tools Tuesday demanding for reviewed conditions of service and wages increment.

The pressmen; EIB Network’s Eliasu Tanko, Daily Guide’s Eric Kombat and TV3’s Christopher Amoako – were at the facility to ascertain reports that the aggrieved mortuary workers had been forced to come to work, despite the ongoing strike action by their counterparts across the country.

The reports said management of TTH on Wednesday, a day after the nationwide action was declared, invited the mortuary workers into a meeting and allegedly asked them to defy it and return to work because president Akufo-Addo was arriving in Tamale on that day for the 62nd Independence Day celebration.

There are only three mortuary staff working in the 800-bed capacity Tamale Teaching Hospital, taking an irregular monthly salary of less than GH400, one of them confirmed.

When the reporters arrived at the facility on Thursday, two of the mortuary workers had reported to work and were actually working against their will and at the blindside of their national leaders.

In a legitimate effort to interrogate why the workers were defying the nationwide strike, the pathologist dashed out from his office, disrupted the interview before charging on the Journalists and later attacked the workers for engaging with the media.

The pathologist went on rampage for over 20 minutes, shouting about at the facility, brushing off visitors who tried to calm him down before launching the assault on the aged mortuary staff.

“You said you are on strike what are you doing here”, he asked the staff after spanking his chest and pushed him away. “You are speaking to these people [journalists], what permission do they have? What about if they are recording you”.

He then directed his fury at the journalists before the facility was shutdown yesterday in a solidarity protest.

Hospital authorities are yet to officially comment on the incident. – Eliasu Tanko

One dead at Tamale Teaching Hospital over expired anesthesia drug