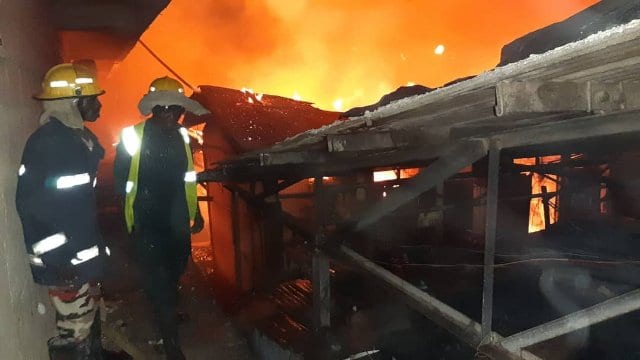 The Ashanti Regional Police Command has arrested a total of 33 suspects in connection with the weekend’s market fires that occurred at the Asafo and the central market in Kumasi.

The Chief Executive of the Kumasi Metropolitan Assembly (KMA) Osei Assibey Antwi has pointed to arson, as the two major  facilities recorded three separate fire incidents in less than 72 hours.

The first incident occurred on Good Friday, followed closely by the second and third on Saturday and Sunday evening at the Kumasi Central and Asafo Markets.

The Mayor of Kumasi Osei Assibey Antwi in an interview stated that the sequence of the unfortunate incidents cannot be viewed as merely accidents.

“I think I have to be very blunt it is not just an accident that we are witnessing, it started with the Central Market which we all thought it was maybe an accident. Yesterday too, a fire took place and today but now looking at the occurrence of it everything is clear that it is arson, people are behind it.

“So from here, I’m going to report to the Regional Minister who’s the Head of the REGSEC that a team must be deployed immediately.”

Meanwhile, Member of Parliament of Subin Constituency in Kumasi Metropolis, Eugine Boakye Antwi, who visited the fire-ravaged markets to sympathize with the victims, expressed shocked at the level of destruction in the market.

Ultimate FM’s Isaac Justice Bediako, reported of massive destruction of sewing machines, food items, clothes, and other leather materials used for belt and shoemaking and others.

Victims in an interview called on the government for support to enable them to restart life again at the market.

“Currently we have lost all our capital to the fire which started last night as traders and tailors in this market, we seriously need government support to restart our operations.’’ Zonal president of Tailors and Dressmakers Association, Kwaku Amankwah told journalists.