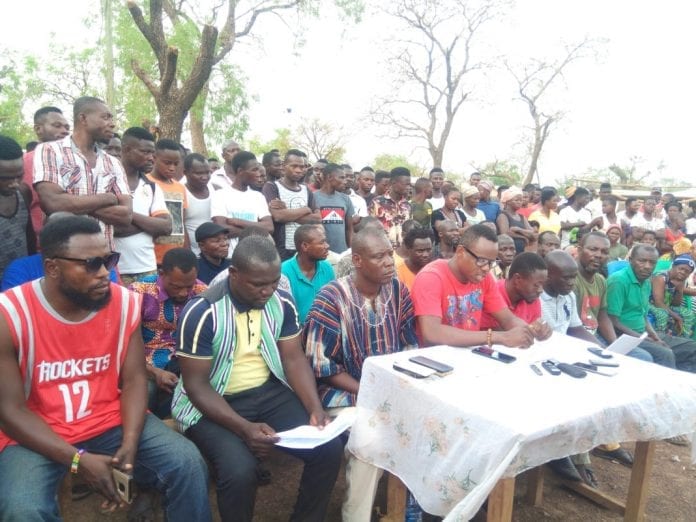 A report by the Minerals Commission on the recent mining-related killings in the Talensi District has fueled more tension in the enclave with scores of residents renewing threats of “a guerrilla warfare” and “a regional demonstration” if their demands are not met in two weeks.

They had expected the commission to have, based on the findings it made during its investigation into the killings, applied stiffer penalties on the culprits after 17 Ghanaian small-scale miners died on January 23, this year, from a mining explosive blasted by the Shaanxi Mining Ghana Limited, a Chinese company operating in the area.

They had also expected the commission, which (as contained in its report) found the foreign company to have breached several of Ghana’s mining regulations and culpable of the killings, to have immediately revoked the mining licences in the possession of Shaanxi and its local business partners— Yenyeya Mining Group and Pubortaaba Mining Group— and directed same guilty party to compensate the miners whom they believe were victims of “target killings”. But the commission levied the “cash-rich” Shaanxi nothing beyond a “paltry” US$50,000.00.

The warfare threats, which had popped up during an anti-Shaanxi street demonstration staged in March (last month) in the region, boomed more deafeningly at a news conference held Tuesday (yesterday) at Gbane, the district’s main mining community.

“By friendlily fining Shaanxi and preparing them to continue work is a recipe for war. By not compensating the blast victims is a call for total rejection of Shaanxi. By not revoking the licences of Shaanxi is a deliberate plan to kill many more of the youth. By deliberately finding faults with small-scale miners and attempting to interrupt their operation for the sake of Shaanxi is a call for guerrilla warfare.

“We will never allow anyone to turn Talensi into a conflict zone. We are grateful to the NDC government of former President Jerry John Rawlings who thought it wise blocking the land out for small-scale mining about 25 years ago. We are also aware that His Excellency President Nana Addo Dankwa Akufo-Addo will not allow the Minerals Commission and the sector minister to jeopardise the peace, prosperity and unity in Talensi,” the Concerned Citizens of Talensi, a familiar pressure group going by the acronym CCT, stressed in a statement read by its Secretary, Augustine Mmi-Oni Guure.

The Minister for Lands and Natural Resources, Kwaku Asomah-Cheremeh, came under razor-sharp criticisms from the disappointed residents and members of the pressure group over the Minerals Commission’s report, saying he is backing the Chinese company to kill more Ghanaians in the district.

“The report clearly finds Shaanxi guilty [of] killing those young men but failed to recommend compensation for their families. What wickedness is this? Honourable Minister, you have been misled by the Minerals Commission into making very bad directives. You have called the victims thieves and illegal miners. With all due respect, withdraw that unwholesome statement and take your time to peruse the documents we sent to you.

“The real thief and illegal miner is Shaanxi Mining Ghana Ltd and its partners, Yenyeya and Pubortaaba mining groups, who have trespassed almost all concessions closer to them. We are sad that you spoke the mind and words of Tongo Rana (the Paramount Chief of Talensi), disrespecting tindanas (traditional landowners), chiefs and elders of Talensi by calling their sons thieves and endorsing more killing. Any money or benefit given to any authority leading to endorsement of this blast killing is painted with a bloody curse,” they fumed in the statement.

Joseph Azumah Atule, one of the notable members of the CCT, slammed the Minerals Commission for “trying to make a scapegoat” of a popular mining-pit owner in the community, Kwasi Appiah. He said Mr. Appiah, who is also known as “Kwasi Bantama”, was not an illegal miner as cited in the report but an authorised concessioner working in a licence area.

“Those pits are not illegal pits. Kwasi Bantama is not an illegal miner. We are part of him. This is the issue. Charles (owner of the Yenyeya Mining Group and former associate of Mr. Appiah) acquired the licence (disputably) and had a problem with Bantama Mining Group (which belongs to Kwasi Appiah). We were called to the Minerals Commission’s head office on August 26, 2010. What the Minerals Commission’s Chief Executive told us was we should all go back and work until the issue is resolved.

“The issue still remains unresolved. So, if Charles is working, shouldn’t the Bantama Mining Group work? The place is licensed. So, if somebody is working on a licence land, it is not illegal. Kwasi Bantama being used as a scapegoat is a cover-up. Their bogus report has confirmed the claims by the Concerned Citizens of Talensi that Shaanxi killed the 17 miners intentionally,” he asserted.

The Minerals Commission ordered an immediate shutdown of Shaanxi’s operations in the district in the wake of the January 23 multiple-death disaster.

But the air is soaked with rumours that the Ministry of Lands and Natural Resources has written a letter to the under-pressure Shaanxi to resume work. The rumoured letter is drawing more rage and fire in the area, with agitated natives and residents levelling fresh threats at the Tuesday’s news conference to fight back any attempts by anybody to reopen the firm.

“We will not sit here and they will kill us and take the gold to China. We’ll resist and defend our people. This time round, it’s based on their own report that we are going to act. We’ll resist whoever gives them chance to come and work here. They should come and start work and we’ll see. We are ready. We’ll stop them!” vowed the acting Upper East Regional Chairman of the Ghana Small-Scale Miners Association and CCT member, Robert Tampoare, attracting a loud crack of applause from the angry crowd.

The unhappy group and the grieving families of the 17 ‘slain’ miners believe the Minerals Commission, whose report is “astonishingly” mute about compensation for the victims, has taken advantage of the disaster by only imposing the US$50,000 fine on the blameworthy Shaanxi just to enrich itself.

“This particular amount that they fined Shaanxi is a peanut to them. What is fifty thousand dollars to Shaanxi? Looking at the amount of gold that they take from this soil, this amount is just an insult to the people of Talenteng. They are even paying the fine to Minerals Commission [to enrich the commission] and there is no compensation for those killed,” the CCT’s Vice Chairman, Bismark Zumah, wondered as he took turn to address the the press and the crowd.

Adding his voice, another top-ranking CCT member, Albert Naa, said: “The Chinese want to take the people of Talenteng for granted. And we will not allow that. The Almighty God, knowing our plight and where he put us in his world, decided to bury something (mineral resources) under the ground so that we, too, by that can improve our livelihoods. But some people want to take that for granted. They want to take that away. That is why we are rising.” – Edward Adeti