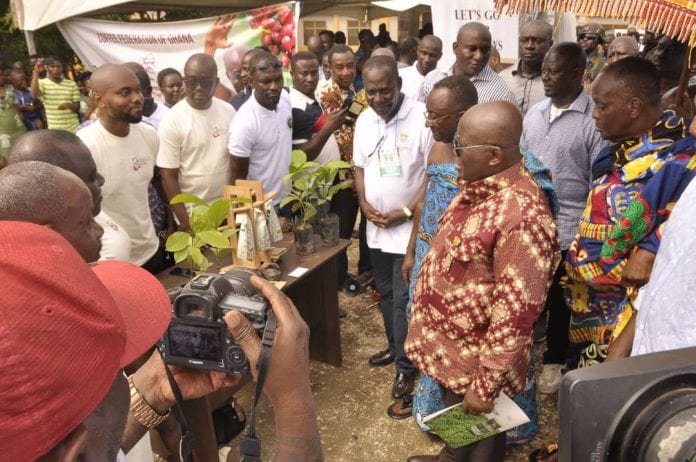 The Coffee Federation of Ghana (CFG) has lauded the President and the joint leadership of Ministry of Food and Agriculture (MoFA) and the Ministry of Local Government and Rural Development (MLGRD) for taking the bold step to launch the Planting for Export and Rural Development (PERD), an initiative meant to further boost the revival of the country’s economic growth through the agricultural sector, especially, the production of cash crops for exports.

In the view of the Federation, the introduction of PERD is a good spring board to mainstream Ghana’s cash crop trading, including coffee, a crop which has taken the center stage as the hottest commodity on the world market in recent times.

President of the CFG, Chief Nat Ebo Nsarko, commenting on the PERD moments after its launch in Dunkwa-On-Offin in the Central Region, Tuesday, said the initiative has come at a better time in lieu of the climate change challenges confronting particularly cocoa farmers.

“It’s one of the best legacies the President, Nana Addo Dankwa Akufo-Addo can bequeath to us Ghanaians. Coffee by all standards is one of the major economic boosters; one of the world’s hottest and fastest moving commodity”, he noted.

The President of the Republic, HE Nana Addo Dankwa Akufo-Addo, inaugurating the ambitious program under the theme ” Export Diversification, a tool for Development”, said PERD is a game changer that will enhance the foreign exchange earning capacity of the Ghanaian economy.

PERD, he noted “provides a historical opportunity for addressing the economic fundamentals by expanding the capacity to earn foreign exchange from agricultural exports and generate much needed jobs”.

With the program designed to focus on the development of selected export tree crops namely cashew, coffee, oil palm, coconut, mango and rubber, the President added that PERD presents Ghana with opportunities for diversification and new sources of revenue.

Reiterating the commitment of his government to the development of the selected tree crops, the President stated that government is taking the necessary steps towards the establishment of the relevant institution to regulate tree crop development in the country.

Aside the benefits of providing diversified sources of revenue, President Akufo-Addo stated that PERD will link agriculture to industry through the provision of a solid raw material base for industrialisation, develop rural economies and the structural transformation of the national economy.

“The selection of crops in each District depends upon the ecological zone. The initial effort in preparation of the PERD has been met with resounding success with the establishment of nurseries all over the country. In the initial years of the programme, a total of 32,591 hectares will be planted with the tree crops in 191 districts,” he said.

The Minister for Food and Agriculture, Dr. Owusu Afriyie Akoto, also commenting on the program, said PERD is a well thought out initiative which holds great promise for Ghana’s economic future.

He said PERD is one of the major modules under the Planting for Food and Jobs (PFJ), the government’s flagship program to addressing the challenges in the agricultural sector.

He commended the CFG and other groups ie Cashew, oil palm etc for their unique organizational and active involvement in the PERD program, encouraging them all that the momentous efforts will duly be very rewarding for the people they represent and for Ghana as a whole.

According to the President of CFG, Ghana seeks to add its name to the world coffee index soon. He indicated that the World coffee exports amounted to 10.16 million bags in February 2019, compared with 9.85 million in February 2018.

Ghana to lose $1.5bn if it does not diversify into coffee production – Experts hint