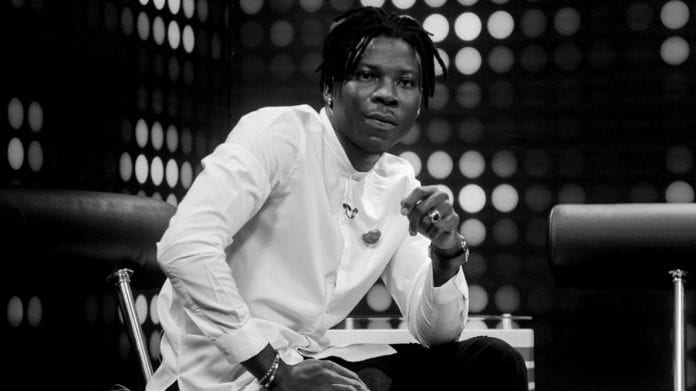 The CEO of Burniton Music, Livingstone Etse Setekla, known in showbiz as Stonebwoy, has stated his disappointment in the current government of Ghana over its unfulfilled promises made to citizens.

He explained that many socioeconomic happenings are proof of a failing government because the government have reneged on their many promises.

Speaking to Serwaa Amihere on GH Today on GhOne TV, the Afrobeat and Reggae/Dancehall musician, Stonebwoy in assessing the rise in the Dollar Cedi Rate, the Menzgold Saga, banks being shut down and some consolidated are definitely not a reflection of what the current government promised Ghanaians.

“I’m not trying to be political right now. I’m just trying to be a patriotic citizen. I’m a citizen of Ghana and a proud one of course. The word out there o, is not too … If I can say, this regime, we have seen banks closed like never before, we have seen the Menzgold, like a thing of such a situation had happened a long time ago when we all heard Pyram and DKM and all and this time also, there are so many things happening that people actually and so many promises that the government present actually made that people haven’t seen yet,” he said.

He further explained that the economic challenges compared to the promises made that is giving credence to the government’s failure in the area of delivering on their promises.

“Comparing all these things, you’d find out that it is not as the present government promised. The dollar has found its legs now. It used to have 6 but now…,” he stated.

Stonebwoy, whose ambassadorial contract with Menzgold lasted for one (1) year explained, he still has a very good relationship with the Chief Executive Officer of the company, Nana Appiah Mensah (NAM 1).

The “Kpo Keke” hitmaker, Stonebwoy had 11 nominations at the 20th Edition of the Vodafone Ghana Music Awards (VGMA) 2019. He has won the Reggae/Dancehall artist of the Year for four (4) consecutive time in the VGMA. He is however optimistic of winning the Artist of the Decade.