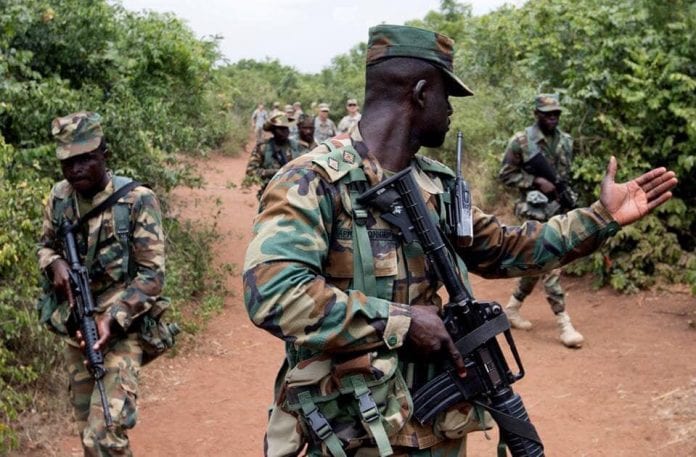 A Military captain stationed at Burma Camp has been brutally assaulted and injured by a three-man gang at Akyem Nkoroso in the East Akyem Municipality of the Eastern region.

The victim, Captain Boateng Agyekum of Base Workshop, Burma Camp-Accra, suffered fractured arm and has been sent to the 37 Military Hospital for treatment.

Information gathered indicates that the father of the injured Military officer Oware Agyekum was attacked and beaten up by the suspects identified as Godfred Atta Bosompem, Afum Cafman and one other person at Nkoroso community.

Shortly after the incident, he narrated the ordeal to his son – the Military Captain – who was also in the village with other military officers attending a funeral of a relative.

Captain Boateng Agyekum who was angry at the conduct of the suspects approached them to interrogate them, however, while questioning the said suspects, tempers went high and the suspects pounced on him and brutalized him causing a fracture in his arm.

This created a chaotic scene which attracted many people. Other military men who were in the town for the funeral also rushed to the scene upon hearing the incident but the suspects took to their heels.

They, however, managed to arrest Godfred Atta Bosompem, 36, and handed over to the Suhum Police with injuries on his mouth. He was admitted at the Suhum Government Hospital where he has been treated and discharged.

The Public Relations Officer of the Eastern Regional Police Command, DSP Ebenezer Tetteh confirmed the incident to Kasapa News adding that the suspect has been detained to assist in Police investigations while efforts are being made to arrest other accomplices now on the run. – Kojo Ansah