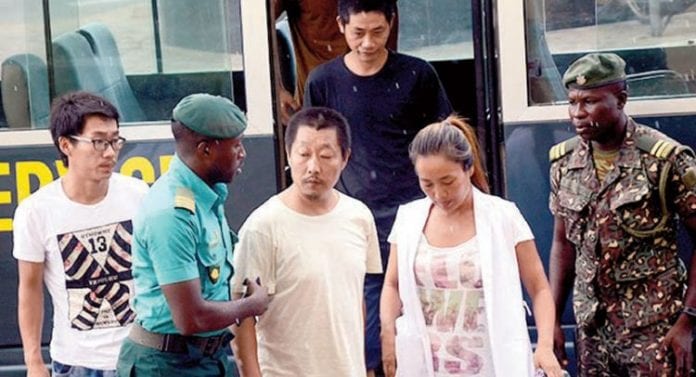 His comment comes after the office of the Senior Minister put up a spirited defence for the latter vis-à-vis his remarks made regarding the deportation of Chinese galamsey Kingpin, Aisha Huang.

Mr Yaw Osafo Marfo is heard in a widely-circulated video saying, it does not serve any Ghanaian interest to have Aisha Huang jailed in Ghana for illegal mining, where she’s alleged to have committed the crime in connivance with several others.

“We have a very good relationship with China. Today, the main company that is helping develop the infrastructure system in Ghana is Sinohydro, it is a Chinese Company. It is the one that is going to help process our bauxite and provide about two billion dollars to us.”

“So when there are these kinds of arrangements, there are other things behind the scenes. Putting that lady (Aisha) in jail in Ghana is not going to solve your economic problems. It is not going to make you happy or me happy, that’s not important, the most important thing is that she has been deported from Ghana…”

“…I am saying that there are many other things beyond what we see in these matters and everybody is wide awake, the most important thing is that we have banned this, we have established regulations and we are protecting our environment. That is far more important than one Chinese woman who has been deported out of the country”.

But in a tweet hours ago, Mr. Kwakye Ofosu slammed the Akufo-Addo government for the double standards in dealing with ordinary people as against Foreign nationals.

“To send armed men after unemployed Ghanaian youth engaged in Galamsey and have some of them jailed for the offence and publicly justify your refusal to prosecute a foreign national who commits the same offence, is a shocking betrayal of the mandate of the people.”

Aisha and four other Chinese nationals who were arrested for their involvement in illegal mining (galamsey) in Ghana, were deported after the state filed a nolle prosequi to discontinue the trial.

Based on the application, the court discharged the five accused persons.

The other four accused persons were charged with disobedience of directives given by or under the Immigration Act, 2000 (Act 573).

According to the prosecution, Aisha had a mining concession at Bepotenten and also operated a mining support services company.

The four other accused persons, it said, were employed by Aisha to work at the mining site.

The prosecution claimed checks at the Minerals Commission, however, revealed that Aisha had no licence to operate either a mine or a mining support services company.

They also contended that the visas issued to all the five Chinese by the Ghana Embassy in Beijing, China, did not allow them to work in Ghana.