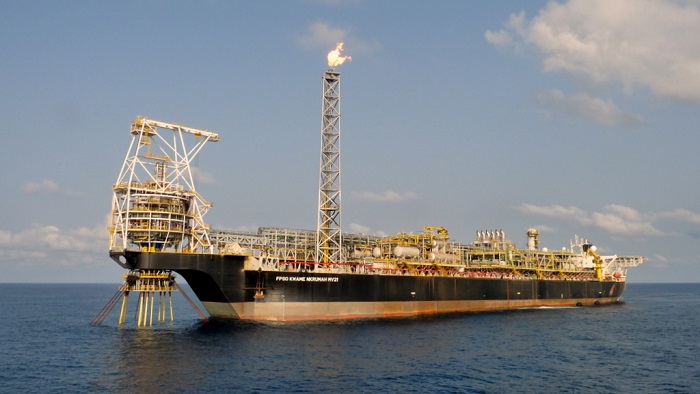 In a statement signed and released in Accra by the Ranking Member of the Mines and Energy Committee of Parliament, Adam Mutawakilu, the opposition NDC MPs are demanding that as a matter urgency the Ministry of Energy (MoE),
Clarifies the ownership position in relation to the new oil discoveries of oil in Deepwater Tano Cape Three Points.

They are also demanding that the government takes steps to ensure the drafting and signing of a new Petroleum Agreement as demanded by Act 919 for these new discoveries and also apprise Parliament of the relevant information relating to these discoveries, including but not limited to all the technical, legal, and commercial details.

Below is the full statement issued by the Minority NDC Caucus.

“GHANA IS SET FOR A POTENTIAL LOSS OF $7.2 BILLION OVER AKER OIL FIND”

Concerns on Recent Oil Discovery
The Minority Caucus in Parliament has learnt with shock, certain developments relating to the recent oil discovery in the Deepwater Tano Cape Three Point (DWT/CTP) Block which is set to lead to the loss of a whopping $7.2 billion to the State.

On 14th February 2019, the Ministry of Finance (MoF) announced what it described as the biggest oil find in Africa, of 450 – 550 million barrels with potential reserves of nearly 1 billion barrels of oil equivalent. A find which is estimated to be at least $30 billion at today’s crude oil price of $65 per barrel.

The Minority Caucus is extremely concerned that the Government of Ghana (GoG), and the Ghana National Petroleum Corporation have failed to clarify the ownership of this latest discovery, and appears to be treating it as part of the original Hess discovery.

Clarity is crucial in this matter because a new Petroleum Agreement (PA) for any new Exploration leading to a new discovery will give the State much enhanced fiscal terms, including at least a 10% Royalty for GoG, plus a minimum of 15% Carried Interest as stipulated by Law; whereas the existing Hess/Aker Petroleum Agreement gives Ghana 4% in Royalty, and 10% Carried Interest, representing a minimum difference of 11% in oil production and revenue that would have accrued to the State.

On 8th February 2006, the Republic of Ghana and the Ghana National Petroleum Corporation (GNPC) on one hand, and Hess Exploration Ghana Limited (HESS) on the other, entered into a Petroleum Agreement (PA) in respect of the Deepwater Tano Cape Three Point (DWT/CTP) petroleum Block which was subsequently ratified by Parliament that same year, with a shareholding structure of 90% for Hess, and 10% for GNPC.
The Exploration period for the DWT/CTP Block was seven (7) years. As such the Exploration License expired on 18th July 2013. During the Exploration period, the Operator (Hess) had acquired over 500 Sq. Km of Seismic data, drilled eight (8) Exploratory Wells and made seven (7) successive discoveries.

Following the high Exploration success rate, Hess organized a Data-Room to farm-down on it 90% interest in the Block, thus changing the shareholding structure to Hess – 50%, LUKOIL – 38%, GNPC – 10%, and Fueltrade – 2%.

In 2018, Aker Energy Ghana Limited (Aker) bought Hess’ interest in the DWT/CTP Block. And since Aker took over from Hess in 2018, it has successfully appraised the Pecan 4A well which was discovered in 2012 under President Mahama’s Government.

As such it is our considered opinion therefore that these latest oil discoveries fall outside the original Hess Petroleum Agreement. In such a circumstance, to cover these new discoveries the Government of Ghana has an obligation under Act 919 to ensure the immediate signing of a new Petroleum Agreement in order to protect and preserve the country’s interest.

Conservative estimates shows that Ghana stands to gain a minimum of $9 billion if this new Petroleum Agreement were to be entered. The existing arrangement gives Ghana only $4.2 billion which would be detrimental to the country’s interest, given its precarious financial position and the urgent need for resources to finance developmental agenda.

Also, the Minority Caucus in Parliament have been reliably informed of serious Technical, Legal, and Commercial issues on the Plan of Development (PoD) submitted by Aker Energy, including but not limited to the following:

That Aker Energy plans to deploy new untested but innovative solutions for the production of crude oil from the Pecan Field.

These untested technologies come with significant operational risks, and that appropriate measures would be required to mitigate them.

That Aker proposes that the implementation of the PoD is made conditional.

For example, that “the subsequent developments of petroleum resources within the Development and Production Area shall be subject to the same fiscal terms as for the DWT/CTP Pecan field development.”

That Aker intends to use the Pecan field as the anchor for field development. Which means all additional exploration and development will be done on the back of Pecan, and this will have adverse implications on the Government take from the Pecan discovery.

The Minority is studying the concerns raised at GNPC and Petroleum Commission (PC) Boards and will come out with a statement in a couple of days.

It is also the understanding of the Minority that the government is entertaining a discussion with Aker Energy on changing the terms of the AGM Petroleum’s South Deepwater Tano (SDWT) Block which could lead to a reduction of government’s equity, royalties, and other taxes.

Minority’s Demands
Considering the above, the Minority Caucus in Parliament demand that the Ministry of Energy (MoE), as a matter of urgency;
Clarifies the ownership position in relation to these new oil discoveries
Take steps to ensure the drafting and signing of a new Petroleum Agreement as demanded by Act 919 for these new discoveries
Apprise Parliament of the relevant information relating to these discoveries, including but not limited to all the technical, legal, and commercial details.

Additionally, the Minority demand that the Ministry of Energy confirm if Government of Ghana, directly or indirectly through the Ghana National Petroleum Corporation, exercised the option to acquire the 10% equity interest that was negotiated and agreed with Hess as one of the conditions for the Lukoil farm-in; and which Parliament approved such spend in GNPC’s budget.

Lastly, and with regards to the South Deepwater Tano (SDWT) Block; the Minority Caucus demand that the Government of Ghana (GoG) needs to confirm if Aker has approached the GoG to consider reducing government’s interest from the current potential 49% that GoG and GNPC/GNPC Explorco holds in the Block.

Caution to Government
The Minority would want to put to government that “the situation of pronouncing a discovery under an existing Petroleum Agreement whose Exploration period has expired violates the terms of the Agreement and the laws of the country.”

Hence any natural resources discovered or secured under these circumstances have to be forfeited to the State.

The Minority puts Nana Akuffo Addo’s Government on notice that “we would resist these attempts by Government to connive with any oil company to deprive the good people of Ghana the benefits of their natural resources, in accordance with the Laws of Ghana.”

We further put Nana Akuffo Addo’s government on notice that “any shortchanging of Ghana’s entitlements will be revisited by all means possible under the laws of Ghana.”
In conclusion, the Minority Caucus in Parliament expects the Nana Akuffo Addo led government to address all the issues raised to ensure that Ghana is not short changed in its entitlements.