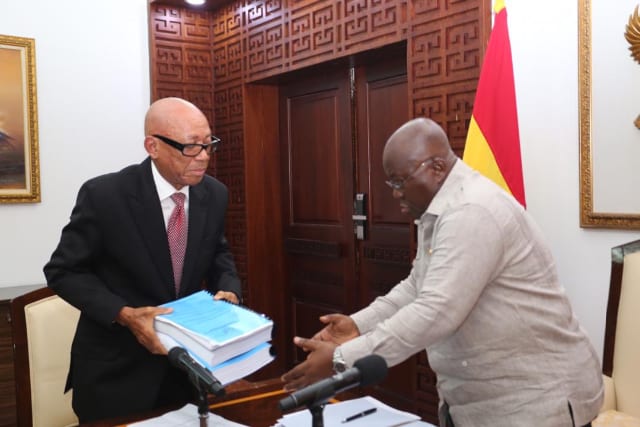 President Akufo-Addo has condemned the leakage of part of the Emile Short Commission report of the Awayaso Wuogon bye election describing it as irresponsible.

He said the government will rather err on the side of caution rather than make any hasty decisions.

President Akufo-Addo said until the government is satisfied with response that is up to it’s sense of responsibilities, the report will not be released.

President Akufo-Addo stated this when members of the Ghana Anti Corruption Coalition paid a courtesy call on him at the Jubilee House.

His comments on the issue comes on the back of EIB Network’s interception of the report submitted to the President which aspects of it was published weeks ago.

Reacting to the leakage early on, the Director of Communications at the Presidency, Eugene Arhin, said the President won’t be stampeded to release the Emile Short Commission report.

“There are two options the constitution of the Republic gives the President, anytime a report of such nature is brought to him. So what I can say is that the President will not be stampeded into making any decision now. He has to satisfy himself first with respect to the decision he wants to take.Once that decision is taken, we’ll definitely let the Ghanaian people know.”

The by-partisan committee in its report has recommended to the President some austerity measures to be taken against key government functionaries, and agencies indicted in the report including disbandment, prosecution and sanctions.

Already, there is pressure from Civil Society Organizations(CSOs) demanding that a white paper be issued on the report.

Also the main opposition NDC says the non-publication of the report is a “blatant disregard for the principles of transparency.” – Additional files from GBC online.