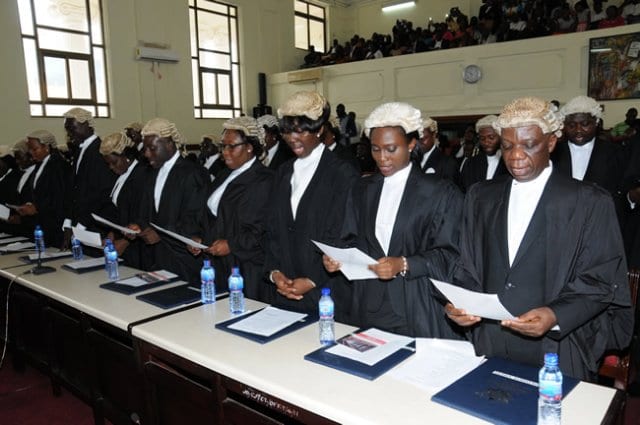 Parliament has directed the General Legal Council (GLC) to consider re-opening the period for remarking to enable professional law students who wrote the 2017/2018 Examinations the opportunity to exercise that right if they so wish.

The House has subsequently directed the consideration of reducing the current re-marking fee from GH₵3,000.00 to GH₵500.00.

That notwithstanding, it has directed the adoption of off-site marking retreat to ensure speedy re-marking of scripts and the immediate release of all marking schemes and examiners’ reports to professional law students and lecturers of the Ghana School of Law

It has also urged the Independent Examinations Committee (IEC) to consider holding supplementary Examinations for all referred candidates in the 2018 Professional Law Course Examinations in a timely manner to ensure that successful candidates are enrolled in this year.

The House on Wednesday made these directives to the GLC, the statutory body responsible for Ghana legal education, following the adoption of the Report of the Ben Abdallah Banda’s Committee on Constitutional, Legal and Parliamentary Affairs on the petition by professional law students seeking review of the results of the 2017/2018 New Professional Law Course Examinations.

The directives were part of the recommendations made by the Committee and submitted to the plenary for consideration and looking into the petition submitted by a group of Professional Law Students of the Ghana School of Law to the Rt. Hon. Speaker on Tuesday, March 5, 2019.
Background

The students had among other things expressed grief and disappointment over the mass failure recorded in the 2018 New Professional Law Course Examinations conducted by the IEC in June and October 2018.

They emphasized that the factors which caused the mass failure go beyond poor performance of students. They partly attributed the mass failure to factors such as questions set outside the approved syllabus, disconnect between lecturers and the IEC and defects in the marking, recording and tallying of examination results.

The students further complained about the late release of results, high cost remarking and difficulties encountered in the implementation of the repeat policy under LI 2355.

Based on the above issues, the professional law students sought the intervention of Parliament to review the results of the 2017/2018 New Professional Law Course Examinations as follows:
1. Annul questions set outside approved syllabus and remark remaining questions over 100%.
2. Reduce the cost of remarking from GH₵3,000.00 to GH₵500.00.
3. Re-open the period for remarking.
4. Ensure timely release of results of the remarking to coincide with this year’s Call to the Bar; and
5. Review the repeat policy under regulation 14 of LI 2355.

Response by lecturers of GSL

The Chairman of the Committee, Ben Abdalla Banda, in presenting the Committee’s report to the plenary said lecturers of the Ghana School of Law essentially concurred with the submissions of the professional law students when the Committee met them.

According to him, the lecturers maintained that, though they have on many occasions requested IEC to furnish them with copies of its Examiners’ Report and marking schemes, none of those critical documents have been given.

The lecturers, he added, further stated that the remarking fee of GH₵3,000.00 was too high and ought to be reduced drastically. He said the lecturers recalled the GSL used to charge remarking of GH₵300.00 in 2015 before the IEC took over.

Hon. Banda further told the House that the lecturers disclosed to the Committee in 2015, two of their colleagues submitted two proposals for consideration of the GLC to respond to the increasing number of students seeking admission to the GSL. The said proposals comprised a multi-campus concept and creation of a professional law Council but the GLC seemed to have been implementing the proposals selectively.

Furthermore, the lecturers revealed that, prior to the current system with the IEC, the average performance of professional law students stood at 68% but that has since dipped to about 15% in the last two years.

They suspected that the IEC have not been releasing the professional law results timeously because the Examinations Committee have been overwhelmed by the large numbers. To buttress their suspicion, Hon. Banda said the lecturers recounted the case of a student who failed a paper with 23%, but a remarking turned that mark to 76% and therefore proposed the IEC should adopt a residential marking system, under which the IEC would lodge in a facility about three weeks to mark all the papers.

The lecturers, he added, expressed grave concern over the lack of co-ordination between them and members of the IEC.

The Chairman of the Committee further told Members that their engagement with the President of the Ghana Bar Association, Mr. Tony Forson, revealed that the GLC had established a Monitoring and Evaluation Committee investigate allegations made by the students and that the Committee had been given up to March 25, 2019 to submit its report to the Council for action.

Nonetheless, the Monitoring and Evaluation Committee established by the GLC in 2018 to investigate similar allegations had submitted its report to the Council.

Mr. Forson, according to the Chairman of the Committee, also informed Members that the GLC and the lecturers of the GSL were currently cooperating very well and believed that most of the issues being raised by the stakeholders were in the process of being resolved.