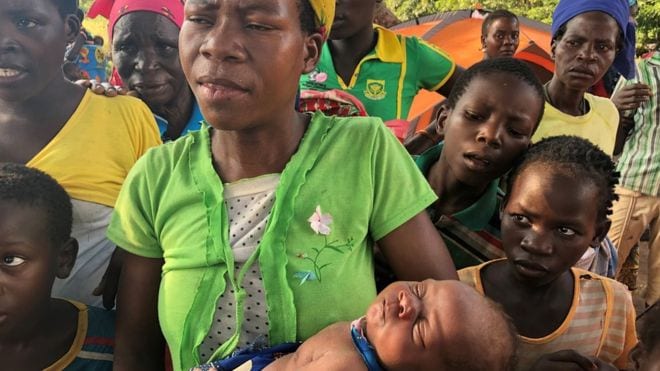 A woman gave birth in a mango tree while escaping floods in central Mozambique caused by Cyclone Idai.

Single mother Amélia delivered her daughter, Sara, whilst clinging to the branches with her two-year-old son.

The family was rescued two days later by neighbours, following storms that have killed more than 700 people.

It comes nearly 20 years after another miracle baby, Rosita Mabuiango, was born up a tree during flooding in southern Mozambique.

“I was at home with my two-year-old son when suddenly, without warning, the water began to enter the house,” she told the UN children’s agency Unicef.

“I had no choice but to climb a tree, I was alone with my son.”

Amélia and her newly extended family are now staying at temporary accommodation in nearby Dombe, and are reportedly in good health.

Rosita Mabuiango, now aged 19, made international headlines after she and her mother Sofia were rescued by helicopter from a tree surrounded by floodwater.

She added: “A lot of people lost everything in the floods, but I gained something.”

But in an interview with the BBC, Rosita said that promises of a government scholarship, and a paid trip to America courtesy of the US government, had all gone unfulfilled.

“My studies have always been financed by my mum, I haven’t received anything from the government,” said Rosita.

“OK, the government built a house for us but it is no longer in good condition. When it rains, there are leaks in the house. At least, they should help renovate it.”

C/R: Woman arrested for dumping baby in a bush