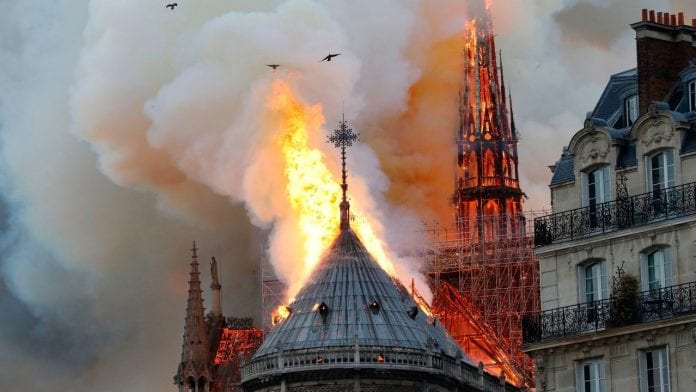 Hundreds of millions of euros have been pledged to help rebuild Notre-Dame after a devastating fire partially destroyed the French cathedral.

The fire, declared fully extinguished some 15 hours after it began, ravaged the 850-year-old building’s roof and caused its spire to collapse.

But firefighters who worked through the night managed to save the Paris landmark’s main stone structure, including its two towers.

The cause of the fire is not yet clear.

Paris public prosecutor Rémy Heitz said his office was “favouring the theory of an accident”, but had assigned 50 people to work on what he believed would be a “long” and “complex” investigation.

Other officials have suggested it could be linked to extensive renovation works taking place at the cathedral.

For centuries the building has been considered the heart of Catholic life in France, a site of pilgrimage for people around the world and home to many priceless religious relics.

Thoughts are now turning to how Notre-Dame will be rebuilt.

French President Emmanuel Macron vowed to reconstruct the historic building even as the fire still burned, while two French business magnates had pledged about €300m ($339m; £259m) between them by early Tuesday.

Offers of help with the reconstruction have also poured in from around the globe, with European Council President Donald Tusk calling on EU member states to rally round.

Mr Heitz told reporters that the first alert was sounded just after 18:20 local time (16:20 GMT), but on inspection no fire was found.

It was only after a second alert at 18:43 that the blaze was discovered, and firefighters were called.

The flames quickly reached the roof of the cathedral, destroying the wooden interior before toppling the spire.

Fears grew that the cathedral’s famous towers would also be destroyed.

But while a number of fires did begin in the towers, French Interior Minister Laurent Nuñez said they were successfully stopped before they could spread.

By the early hours of Tuesday, the fire was declared under control, with the Paris fire service saying it was fully extinguished by 10:00 local time (08:00 GMT).

The pavements here on the Rive Gauche across the Seine are packed with people shuffling along, stopping to take photos or pose for selfies, staring over at the huge, grey bulk of the cathedral.

Police stop the crowds getting any closer, as firefighters use a tapering crane to inspect the facade by the cold light of day. The shrill whistles of traffic police cut the air as sirens of emergency vehicles pass mournfully through the hum of the traffic. But every so often, the birdsong reminds you it’s spring in the City of Light.

In the little square, the charred odour is unmistakable, mingling with the scent of food from cafés.

A group of excited Dutch 14-year-olds has come back to see the ruin after the drama of the blaze they witnessed last night, on their first trip to Paris. Eiffel Tower, Louvre, Luxembourg Gardens, Euro Disney, they have a packed agenda of Easter holiday fun but they are solemn and respectful when they talk about the disaster. It’s a sad moment for Dutch people too, they say. Everyone knows Notre-Dame.

Search teams had already begun assessing the extent of the damage when dawn broke over the French capital. The cathedral’s blackened stone and charred scaffolding were revealed to onlookers for the first time.

Fire brigade spokesman Lt-Col Gabriel Plus said: “The whole of the roof has been devastated… a part of the vault has collapsed, the spire is no more.”

However, it could have been much worse. Mr Nuñez said that, had fire crews not entered the building, “without doubt it would have collapsed”, French newspaper Le Monde reported.

Photos appear to show that at least one of the cathedral’s famed rose windows has survived, although there are concerns for some of the other stained-glass windows.

Franck Riester, France’s culture minister, warned that while the principal structure had been saved, the building was still unstable.

Experts have not yet been allowed on site to assess the damage, due to the dangers.

There were already fears about Notre-Dame’s stability, after cracks appeared in the stone.

Sections of the building were under scaffolding as part of the renovations and 16 copper statues were removed last week.

Individuals and groups are mobilising to help rebuild Notre-Dame. Hundreds of millions of euros have already been pledged.

Another €200m was pledged by Bernard Arnault’s family and their company LVMH – a business empire which includes Louis Vuitton and Sephora – on Tuesday morning, according to Reuters news agency.

The French charity Fondation du Patrimoine is launching an international appeal for funds for the cathedral, a Unesco World Heritage site.

Visiting the scene on Monday night, Mr Macron – who said the “worst had been avoided” with the preservation of the cathedral’s main structure – pledged to launch an international fundraising scheme for the reconstruction.

“We’ll rebuild this cathedral all together and it’s undoubtedly part of the French destiny and the project we’ll have for the coming years,” said Mr Macron.

“That’s what the French expect [and] because it’s what our history deserves,” he added, visibly emotional, calling it a “terrible tragedy”.

Offers of help have also been pouring in from around the globe, with Russian President Vladimir Putin saying he is happy to send experts to help restore the cathedral.

The British government is also looking into what it can do to help with its reconstruction, according Ed Llewellyn, the UK ambassador to France.

Spanish Culture Minister Jose Guirao said his country is also seeking ways to help – although, he added, “right now, above all, it’s about moral support, solidarity and from there, whatever they need”.

What about the cathedral’s treasures?

Emergency teams managed to rescue valuable artwork and religious items, including what is said to be the crown of thorns worn by Jesus before his crucifixion, which were stored inside the cathedral built in the 12th and 13th centuries.

A tunic, which King Louis IX is said to have worn when he brought the crown of thorns to Paris, was also saved.

“We had a chain of solidarity, especially in saving the works of art… [They] were able to be saved and put in a safe place,” said Paris Mayor Anne Hidalgo. “This is a tragedy for the whole world… Notre-Dame is the entire history of Paris.”

Historian Camille Pascal told French broadcaster BFMTV that “invaluable heritage” had been destroyed. “Happy and unfortunate events for centuries have been marked by the bells of Notre-Dame. We can be only horrified by what we see.”