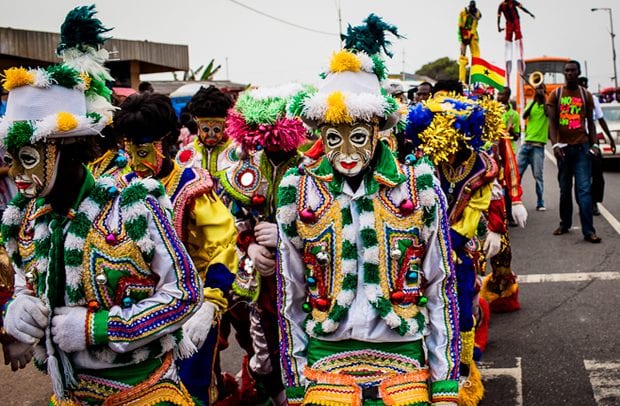 Since then, the festival has been in the crawling state till the early 90s when with the help of the Omanhen, Neenyi Ghartey VII, the Achimota Breweries Company came to assist the organization of the festival for it to start walking. Later, Fan Milk Ghana Limited also came to offer a helping hand. When the legs were about gaining strength from the ground, litigations struck the celebration and these aiders left.

About three years ago, the leadership of the Winneba Masquerade Federation, upon their observation, approached a person who seemed to be a well-wisher, benevolent and a game changer – Mr. James Kofi Annan of Run Off and Challenging Heights, to help secure external aids to enable the masquerade festival stand on its feet and if possible, run. He willingly and gladly accepted to help.

Before this development, the Federation organizes this unique festival annually with the assistance of a promoter. Coincidentally, the year in which this seemed benevolent person was roped-in, marked the end of the five year contract that was signed between the Federation and the promoter. Because the promoter had then contributed significantly towards the development of the festival, the organizers (federation) decided grant him a joint-organizing partnership status.

The presumed well-wisher, benevolent and a game changer – Mr. James Kofi Annan, made it clear to the leadership of the Federation the danger of involving the ‘promoter’, since the federation ought to acquire memorable assets for the future generation and to make the festival reach the utmost height. Mr. Kofi Annan punched so many holes to convince the federation that the involvement of the promoter was a threat to the growth of the festival. However, since the federation does not want to be seen as ungrateful, decided to maintain the joint-organization status instead of pushing the promoter away completely.

Mr. James Kofi Annan, per his company – Nyce Media entered into an agreement, which seemed to be mouth-watering and manna-like with the leadership of the federation. There was nothing in the agreement which debars either party to enjoy the refund of any expenditure that is accrued to him or her under it but Mr. Annan, for the first two years into the contract performance, never took a penny in respect his expenditure towards the festival. This was all in the name of helping the Federation to acquire assets that could benefit the entire Winneba township. This development enabled the federation to purchase four plots of land for future use.

I want to put on record that it is not wrong for the federation to pay for expenses on its festival but the said expenses ought to be agreed on by all parties since they will be paid for. This is indeed a day light robbery. This came as a shock to the federation, for not bearing witness to the monetary value of expenses bored by benevolent who will demand his money back. Meanwhile, most of the expenses did not bring any financial benefit to the federation. It is worth noting that since 1958 to date, the masquerade festival had sold itself both locally and internationally, and therefore anything sent out there on the festival to the international community, benefits whoever sent them there, nothing had come to the federation as a result of so-called advertisement of the festival which Nyce Media undertook. This year, the federation realized just about GH¢31,000 and because it ought to pay its expenditure, the federation was compelled to agree in asking the said benevolent to keep the money MTN gave to them plus few other monies collected from elsewhere to defray part of this abnormal unaware expenditure claimed to have been incurred.

The funniest aspect of the whole story is that Mr. Annan is seriously in bed with the leadership of the groups who boycotted this year’s festival with the aim of destroying it. So the question is, if Mr. Annan wants to represent Effutu in Parliament as a legislator, and he finds nothing wrong with the destruction of the town’s asset (the masquerade festival) because of his opponent – the Member of Parliament for the Constituency, Hon. Alexander Afenyo- Markin is pleading to the federation to help make amends and curtail long-standing litigation which is affecting the future of the festival negatively, then he – Mr. Annan is NOT ONLY SELFISH, BUT A TRICKSTER AND A DESTROYER.

I will at this point urge all my readers to put off their political jerseys and analyze the story clearly. The presumed well-wisher’s reason to land that huge expenditure on the head of the federation instead of helping them to acquire better future as he claimed, was because the federation had found a better person whom they see to be more resourceful so therefore whatever he has put in, he had to claim.

I personally do not think that for Mr. Annan to take his money is a crime but the payee (federation) not being aware of the expenditure items which some have been disclosed as sponsorship packages and now feature as hired services, is my problem. It could be recalled that every philanthropist is at liberty to assist the growth of a festival but if Hon. Alexander Afenyo-Markin alone offers a helping hand and it now yielding this diabolic decision, than I am afraid, Mr. Annan is indeed a TRICKSTER and not a BENEVOLENT.

NB. The views expressed by the writer in the piece are entirely his and does not reflect that of this website.