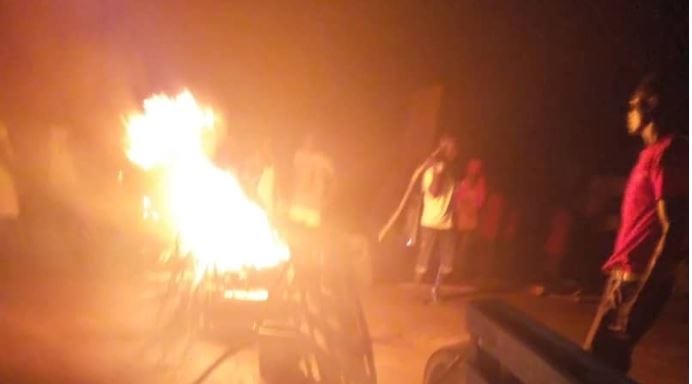 Some angry Youth of Asamankese Tuesday evening attacked Police and Fire Service Personnel during a fire outbreak  at the Kwahu Lane Market Stores in the town compelling the Police to fire 25 warning shots to dispel the violent youth.

The attacked was triggered by what the irate youth claimed to be late arrival of both the Police and Fire Service personnel.

However, on arrival at the scene, some irate youth suddenly launched an attack on them by pelting stones, sticks and other deadly implements.

Also, Ghana Fire Service Tender with registration number FS 438 from Kade which arrived at the scene after receiving a distress call came under attack and the windscreen was smashed with a stone.

As efforts to calm down the youth failed, the Police team was compelled to discharge 25 warning shots before they were dispelled from the scene.

Service vehicle GP 5100 also got the bonnet slightly dented. One CPA called Seth Teye Wayo aged 27 and a civilian named Richard Yirenkyi , 22 , had severe injuries on the head and forehead respectively and were rushed to the Asamankese government Hospital for treatment.

The Fire Tender fled the area without dousing the fire due to the chaotic clashes.

Later, a Police reinforcement team from Akwatia and Adeiso arrived to help patrol the area and restore calm.

Meanwhile, the 2 victims were treated and discharged at midnight.

The Fire was eventually quenched by the residents having caused extensive damage already. The cause of the fire yet to be known. – Kojo Ansah