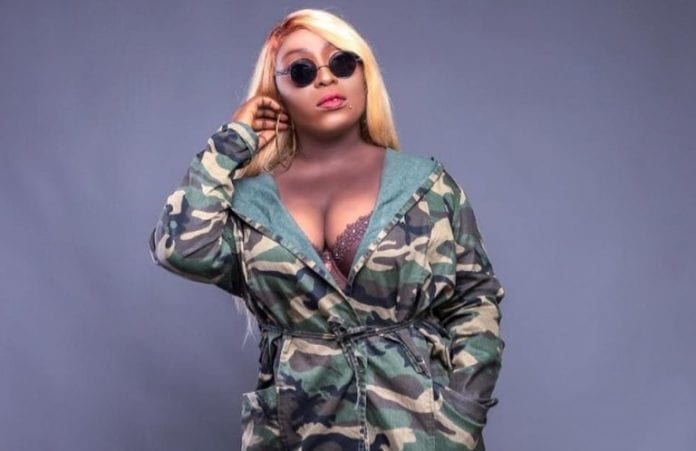 Ghanaian female rapper Eno Barony has explained the reason behind her decision to hide from the public.

eye to be that she was being bullied and called horrible names such as ugly.

In an excerpt of the famous Delay Show, Eno is seen and heard recounting her story and clarifying her decision to stop attending events and showing up on the red carpet sessions; a decision which she made known on social media some years ago.

When asked what drove her to make that decision in the first place, the 27 years old rapper revealed that she didn’t feel comfortable in her skin especially because she grew up in a confined space where she was mostly kept indoors because of how she looked.

“I am someone who has been restricted a lot for a long time. Growing up, school, sometimes friends, sometimes school mates, everywhere I ever lived, I was restricted.” She said

Eno Barony gave more details that she only began to feel free and expressed herself because of the career path she chose.

The female rapper admitted that this really brought down her self esteem and made her lose confidence generally, but most importantly in her looks as a female.

“So it got to the point where I started to do this work, it was like wherever I went when I took a picture, the bullying was too much.

“The first time Sarkodie took a picture with me, he posted it and captioned: Watch out for this girl she is the baddest female rapper.

“The first comment under his post ‘And an ugly one’. So I feared to take a picture let alone post it because the bully was too much.” She added.

The celebrated ‘Queen on the Mic’, Eno Barony recently released the visuals to her newest much talked about single ‘Heavy Load’.

The song aimed at celebrating African women has a well-crafted music video to complement shot and directed by Takyi Native.

I don’t do music for awards – Eno Barony