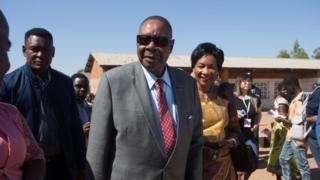 Malawi’s President Peter Mutharika has been narrowly elected to a second term in office with 38.5% of the vote.

The 78-year-old incumbent had faced strong competition in the 21 May election, including from his deputy.

The result was announced on Monday after an injunction ordered by the country’s high court was lifted.

Challenger Lazarus Chakwera, who finished in second place, had sought to delay the results because of concerns over voting irregularities.

The head of the Malawi Electoral Commission (MEC), Jane Ansah, appealed for calm ahead of the announcement.

What were the results?

The MEC say President Mutharika, who heads the Democratic Progressive Party (DPP), gained a narrow victory by about 159,000 votes.

Mr Chakwera, from the Malawi Congress Party (MCP), came close behind with about 35.4% of the vote. He had also placed as runner-up five years ago.

President Mutharika’s deputy, Saulos Chilima, finished in third place – winning just over 20% of the ballot. He had earlier said his name was initially not on the electoral register when he turned up to vote.

With high levels of national poverty, the economy and corruption were key election issues.

The vote was seen as one of the most unpredictable the country had seen.

Turnout was 74% among the 6.8m residents who were registered to vote.

Malawi has been independent since 1964. This was the sixth presidential election held since single-party rule ended in 1994.

The Malawi Congress Party (MCP) sought a delay of the results over allegations of vote-rigging.

They wanted recounts in at least 10 of the country’s 28 voting districts.

In some cases, there were accusations that ballots had been physically doctored with corrective fluid.

The injunction was initially granted on Saturday after the MEC received 147 reports of irregularities.

Vice President Chilima also alleged there had been “serious anomalies” during the vote.

Despite concerns, Malawi’s high court lifted the injunction on Monday and allowed the results to be released – confirming the president’s slim victory.

Who is President Mutharika?

President Mutharika, who has a background as a lawyer and professor, has been the country’s leader since 2014.

He was educated in the UK and the US – and has been involved in Malawian politics since 2008 when his brother, then president, appointed him as chief legal adviser.

He was arrested in 2013 alongside other cabinet ministers accused of plotting to overthrow his brother’s successor.

In the run-up to last week’s vote, President Mutharika’s age and health had been a focus. Shortly before the election he had to deny a rumour that he had died.

The opposition argued that high-level corruption has got worse under his presidency.

President Mutharika himself was sucked into an alleged bribery scandal, but denied any wrongdoing and was cleared by the country’s anti-corruption watchdog.

Policeman ‘stoned to death’ in Malawi