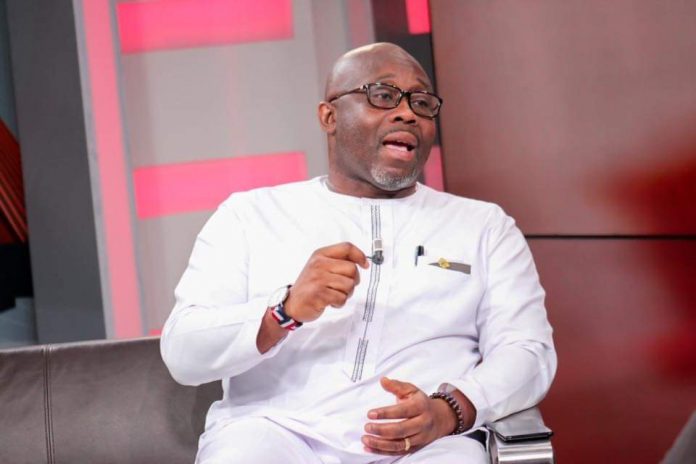 Communications Ministry has said Radio Gold and Radio XYZ must go through the process of acquiring a new authorization if it wants to stay in operations as a broadcaster.

His comments come after Member of Parliament for North Tongu, Samuel Okudzeto Ablakwa threatened a demonstration by NDC parliamentarians and party supporters to protest the closure of Pro NDC radio stations; Radio Gold and Radio XYZ by the National Communications Authority.

Speaking at the vigil held by the party Friday May 10, Mr. Ablakwa noted that the party would stop at nothing till the message of justice and tolerance is drummed into the ears of President Akufo-Addo and his appointees.

“I am very excited to hear that the conveners of this forum have already sent a letter to the Ghana police that if by next week, if Radio Gold and Radio XYZ are not opened, there’s going to be a mammoth demonstration in Accra”, he said.

But the Deputy Communications Minister, George Andah told Kasapa 102.5 FM that the only option left was for the two defunct broadcasters to re-apply for another valid authorisation following their shut down last week.

“We must allow the institutions to work. If we hadn’t taken that action at the end of the day people will say the NCA has gone to sleep and they will start criticizing it. So I think that in the best interest of managing our national spectrum, this was the best thing that NCA had to do. Its not a big deal, because once you sat idle for your authorization to expire, apply for a fresh authorization and if the frequency is available, NCA will allocate it to you, but if you’ve not gone through the process and you want NCA to process your request for renewal when you don’t have any basis for renewing an authorization, obviously that cannot be processed, he told host Kweku Owusu Adjei on Anopa Kasapa on Kasapa 102.5 FM.

The Authority said it had had to shut down Radio Gold and Radio XYZ because both broadcasters had defaulted in renewing their authorisations.

The director general of the NCA, Joe Anokye, explained at a press briefing that in the case of Radio Gold it had been operating for 19 years even though its licence had expired. XYZ’s licence similarly expired in 2016.

The NCA shut down both entities, in an enforcement action to comply with the ruling of the Electronic Communications Tribunal (ECT).

The exercise was also carried out to enforce the Tribunal’s ruling against illegal spectrum users.

Mr Anokye said following the FM Spectrum Audit in 2017, some stations were found to be in default and were fined by the Authority.

However, some of the stations in default were not satisfied and proceeded to the Electronic Communications Tribunal (ECT) and the high court to appeal against the NCA’s decision.

Mr Anokye said this resulted in an ECT decision in 2018 which reviewed the status of expired FM radio broadcasting authorisations. It ruled among other things that companies whose authorisation had expired revert to the same position as a fresh applicant.

Some stations shut down voluntarily after this decision; others did not.