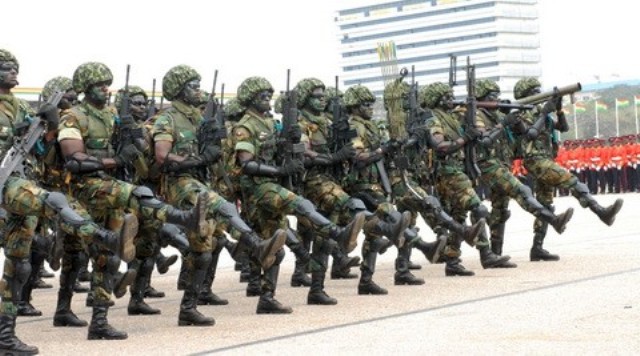 Vice President, Dr. Mahamudu Bawumia, has assured that resourcing of the Ghana Armed Forces to dealing with the emerging security complexities and threats confronting Ghana and the West African sub region remains a top priority of government.

“In the face of these emerging security threats, Ghana can move forward only in an atmosphere of peace and security and as a Nation, we can only rely on the unflinching steadfastness of the Armed Forces in collaboration with other security agencies to ensure the security of the Nation”, the Vice President said.

He added that the Akufo Addo led government “will continue to ensure that the Ghana Armed Forces is well equipped and highly motivated to combat any threat to the peace and security of our Nation”.

“The provision of resources and your logistics requirements is one of the major priorities of the President” the Vice President added.

In his admonishing to the new Officers, the Vice President charged them to guard the “discipline accolade” of the Ghana Armed Forces jealously.

“Let it shape you at all times in order that your call to service shall continually be devoted to Ghana. Shy away from all forms of behaviours that lead you to the insatiable quest for material wealth as it has the potential to steer you off your noble calling” Dr. Bawumia stated.

The Academy grew out of the Regular Officers Special Training Schools (ROSTS) which was established at MATS, Teshie, in 1953. This School provided 6 months preparatory training for selected cadets from the British West African colonies namely:-Nigeria, The Gold Coast, Sierra Leone and The Gambia, prior to their being sent to the UK or other overseas countries for further officer training and Commissioning.

Since its establishment, the Academy has produced over 3,500 Ghanaian officers. Some have retired while the rest are now serving in various capacities in the Armed Forces and in the country as a whole. The Academy has also trained cadets from some sister African countries, notably Nigeria, Uganda, Liberia, Sierra Leone, Burkina Faso, Benin, The Gambia, Togo and Guinea. The first commissioning ceremony was held on 30 September, 1961 for 35 officer cadets. – Wilberforce Asare