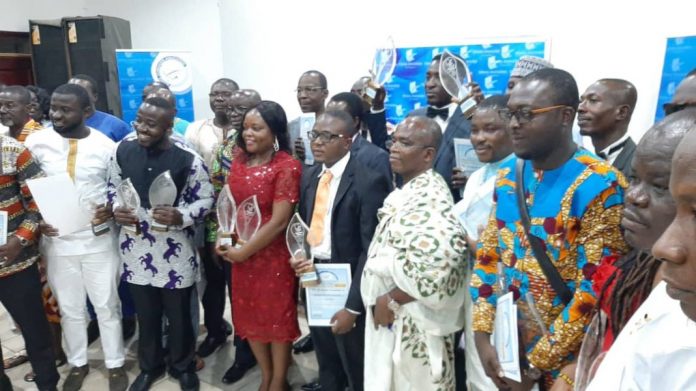 He also received a special GJA award and a citation for standing out as a visually impaired journalist bracing the odds to stand out in the profession.

Parts of the citation read, “Your journey into the media was largely spurred by your quest to find a profession which accommodated your partial blindness and also mirrored your abilities in research, writing and your keen interest in knowing and debating on current affairs and national issues.

“Journalism also found bearing with your nurtured friendship for the radio – a relationship you developed while growing up. Over the years learning on the job and studying online, you have come to love several shades of reports but with a lot of sense of originality far away from what we will call the normal running stories.

“Your editor Mr. Julius Caesar Anadem has always spurred you on to go for the exclusives that conventional reporters will not avert their minds to. You love to focus on stories that inspire youth development and entrepreneurship in your region.”

“You also find it very fulfilling highlighting the plight of deprived communities to draw government attention to their needs. Apart from this; you have been the main anchoring producer for all bulletins of the Ultimate Newsroom which has become a go – to news hub for exclusive and trending stories.

“You also produce the Ultimate fact file; one of the most listened to news analysis and current affairs programs in Kumasi beyond. Your sight problem must have stolen your physical vision but not your mental vision to be the best at what you do.

“A first class in university; and all your reports and back breaking work in the newsroom is however just the beginning of this journey,” it added.

Speaking at the awards ceremony, chairman of the National Media Commission and associate professor with the Christian Service University College Mr. Yaw Boadu-Ayeboafo laid a charge on the state to endeavor to provide persons with disability the resources and opportunities to contribute their quotas to the country.

“I congratulate everybody who won an award, especially my junior brother Ivan and he has demonstrated clearly to us that physical disability is not intellectual inability. That must be a motivation to everyone of us, such that when we see people who are disabled, we will not make a laughing stock of them. Our brains are no better and no less than what is also with them and if we give them the opportunity, they are able to prove their sense of humanity,” Mr. Boadu-Ayeboafo said.

The NMC boss who was also chair of the awards ceremony bemoaned unprofessionalism among journalists and charged journalists to guard the image of the profession as journalism assumes a pivotal role in the governance and development of the country.

In all, 21 journalists from 11 media houses received awards in 24 categories with the best journalist of the region going to Luv FM’s Prince Appiah of the Multi Media Group.