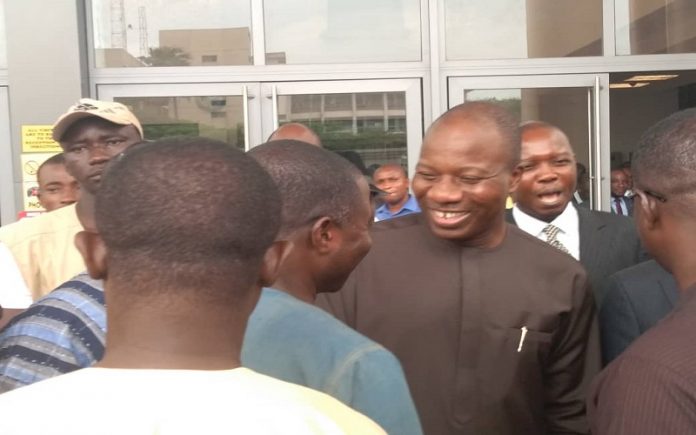 Member of Parliament for Bawku Central in the Upper East region, Mahama Ayariga, has filed a motion seeking an order of the court to strike out the Charge Sheet of the Special Prosecutor accusing him of fraudulently evading customs duties and taxes and abusing his office as a Public Officer for his private benefit.

The court presided over by Justice Afia Serwaa Asare Botwe, did not take the plea of the two accused persons nor give any consideration to the bail issues in the case involving Mahama Ayariga (MP) and one Kendrick Akwasi Marfo of ATLAS-Rent-A-Car Company, because of the said application that is pending at the court.

The case which was called at about 9am this morning was stood down till 1pm because the Member of Parliament was not present in court. The court presided over by Justice Afia Serwaa Asare Botwe, directed lawyers of the MP lead by Godwin Tamakloe, to produce the accused person before the court before hearing at 1pm.

At about 12:50pm, Mahama Ayariga, MP, in the company of the Minority Leader in Parliament Haruna Iddrisu, and other Members of Parliament including Samuel Okudjeto, Dominic Aryine, Ato Forson, Kofi Armah Buah, Thomas Ampem Nyarko, James Agalga, Sam George and Bernard Ahiafor filed in into the Financial and Economic Crime High Court 2 for the hearing.

In a brief ruling, the court referred to Article 118 of the 1992 Constitution which states:
(1) Neither the Speaker, nor a member of, nor the Clerk to, Parliament shall be compelled while attending Parliament to appear as a witness in any court or place out of Parliament.

(2) The certificate of the Speaker that a member or the Clerk is attending the proceedings of Parliament is conclusive evidence of attendance at Parliament.

Saying though it had taken notice of the certificate of the Speaker, the Member of Parliament was in court as an Accused Person and not as a Witness as is captured in Article 118 of the Constitution 1992. The court added that the case would continue according to law and expeditiously so. Subsequently, Justice Afia Serwaa Asare Botwe’s court adjourned sitting to the 10th of June, 2019, for the defence team to move their motions to be filed.

The Bawku Central MP turned down an invitation by the Special Prosecutor, Martin Amidu, over the corruption probe involving him. According to the former Sports Minister, he would not be able to attend to court on the said date because Parliament would be in sessions and he would therefore be working for his constituents.

The Special Prosecutor has charged the Member of Parliament for abusing his office among other offences. This is the first case the Office is pursuing in court since its formation more than a year ago. According to the writ sighted, “Mahama Ayariga aged 44 years in November 2017 at Tema in the Greater Accra Region, did fraudulently evade customs duties and taxes by paying GH¢6,062.86 instead of the approved duties and taxes of GH¢36,597.15 to clear three Toyota V8 Land Cruisers.”

He is also accused of allegedly abusing his office as a public officer for his private benefit by selling three Toyota V8 Land Cruisers with registration numbers GR 2220-18, GR 2221-18 and GR 2222-18 meant to be used for official duties as a Member of Parliament to Kendrick Akwasi Marfo of ATLAS-Rent-A-Car at a price of GH¢40,000 each. – Wilberforce Asare