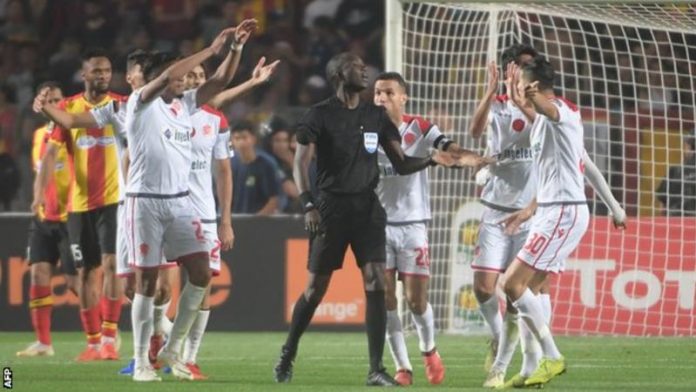 Esperance have been ordered to return the African Champions League trophy and to replay the second leg of the final.

The Tunisian side led 1-0 in Saturday’s second leg but Moroccan opponents Wydad Casablanca left the pitch after an equaliser they scored was disallowed.

Wydad wanted the video assistant referee to check if the goal should stand but the system was not working.

The Confederation of African Football (Caf) said the second leg will be replayed at a neutral venue.

The 1-1 draw from the first leg in Morocco stands.

The replay will be after the Africa Cup of Nations in Egypt, which ends on 19 July.

A Caf statement said “conditions of game and safety were not met” in the second leg and made clear Esperance players must return their winners’ medals as well as the trophy.

Play in the second leg was halted after Wydad thought they had equalised on 59 minutes through Walid El Karti’s header. It was disallowed for an infringement.

The VAR system was visible on the side of the pitch but the players had not been told it was not in use because of a malfunction.

The referee eventually awarded the victory to three-time champions Esperance after a 95-minute delay.

Wydad’s president said the club was “the victim of a scandal” and Caf subsequently called an Executive Committee meeting where the decision to replay the game was made.

We were waiting for about six and a half hours outside a hotel conference room for this decision. One Tunisian journalist posted a live stream of the closed door while we were waiting and it had 18,000 viewers. That shows how big this decision was.

I think Esperance have been punished for the failings of Caf. I’ve just spoken to one of the Caf Executive Committee members who was in the meeting, he says that those responsible for these organisational failures will also be punished.

He told me it was a unanimous decision in the meeting and that something had to be done.

It’s a dangerous precedent and an absolute mess. It’s the second continental cup final this season to descend into farce after the Copa Libertadores in South America in November, which was initially postponed following an attack on the Boca Juniors team bus by River Plate supporters