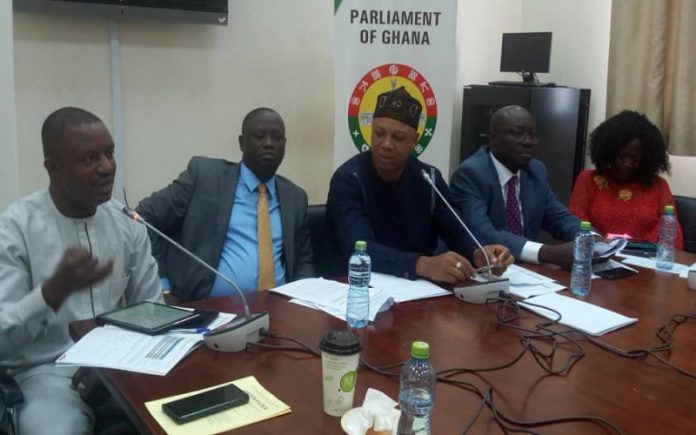 Members of Parliament (MPs) from the opposition National Democratic Congress (NDC) say they are finding it very difficult to believe why the governing New Patriotic Party (NPP) led by the President, Nana Addo Dankwa Akufo-Addo, has sat down unconcerned for the energy sector to accumulate more debt.

According to the NDC MPs, the energy sector which is the main source powering the Ghanaian economy is in dire situation as a result of the failure of the government to honour its payment obligations to players in the industry, especially, those generating electricity to power domestic and commercial consumers.

To them, the inability of the government to pay the power generating companies has clearly exposed the weakness of the President in managing the sector.

Addressing a press conference in Parliament on Thursday, June 20, 2019, over the “true state of affairs” of the energy sector, the Ranking Member of the Mines and Energy Committee, Adam Mutawakilu, said if one considers the debt portfolio of the energy sector led behind by the then governing NDC led by John Dramani Mahama and the measures it put in place to resuscitate and sustain it, it beats their imagination why the sector is still crippled with debt over US$4billion.

The energy sector has over the years been riddled with a debt portfolio of US$2.4billion, an amount of which is termed legacy debt which was accumulated by successive governments between 1992 and 2015.

An amount of US$250million out of the US$2.4billion, kasapafmonline.com understands, was paid to Banks by the Mahama-led government in 2016 to ease the liquidity crunch.

As at the end of the 2016, the energy sector debt was approximately US$2.2billion which was certified and agreed to be settled within 3-5 years starting from 2016 following the passage of the Energy Sector Levies Act 2015, Act 899 (ESLA).

With the interventions made, almost all the state-owned enterprises (SoEs) in the energy, according to Adam Mutawakilu, reported profits in 2016 before handing over power to the NPP.

Northern Electricity Development Company (NEDCo) on the other hand also posted a profit of GH₵1.19million.

However, two and half years into the administration of the Akufo-led government, the above mentioned agencies, GRIDCo, ECG/PDS and NEDCo all posted a revenue loss of GH₵118million, GH₵2billion and GH₵163.7million respectively.

The government’s indebtedness to the power sector entities is further compounding the already distressed entities.

“This is a clear sign of weak sector performance”, a very emotional Mutawakilu noted.
This huge debt portfolio, the NDC MPs contend, is affecting the viability of the power generating companies, calling on the President to provide details on how his government has utilized or expended the ESLA Funds.

There is ‘dumsor’ in northern Ghana – NDC MP tells Akufo-Addo