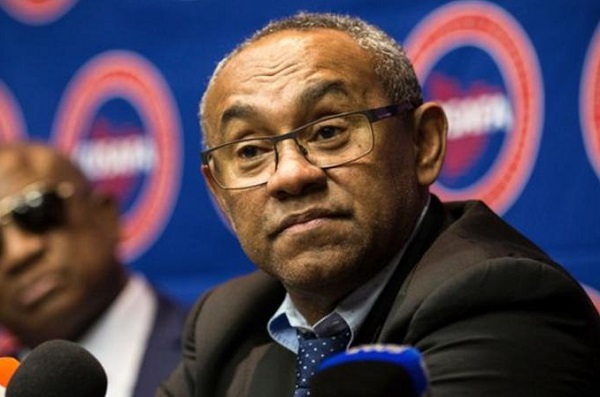 According to a report in African newspaper Jeune Afrique, the 59-year-old was arrested at his hotel in Paris, where global chiefs have gathered this week for FIFA’s annual congress and the start of the Women’s World Cup.

A former sports minister and current senator in Madagascar, Ahmad was elected president of the Confederation of African Football in 2017, a position which gave him a seat on FIFA’s ruling council as a vice president.

His time in charge of the Egyptian-based organisation, however, has been dogged by controversy and he is already the subject of a FIFA ethics committee investigation.

Thursday’s arrest is understood to relate to bribery allegations linked to the 2017 switch CAF made from its German kit supplier Puma to French company Tactical Steel.

In a statement, FIFA said it “has taken note of the alleged events concerning Mr Ahmad Ahmad, who is being questioned by the French authorities in relation to allegations related to his mandate while president of CAF”.

It continues by saying it is unaware of the details surrounding this investigation and therefore cannot make any specific comment.

But it adds that FIFA has asked the French for “any information that might be relevant to investigations taking place within its ethics committee”.

Having noted that everyone is innocent until proven guilty, the statement concludes: “As the FIFA president reiterated yesterday, FIFA is fully committed to eradicating all forms of wrongdoing at any level in football.

“Anyone found to have committed illicit or illegal acts has no place in football.

“FIFA is now clean from the scandals that tarnished its reputation and this same determination should prevail in governing bodies such as confederations. FIFA will be at the forefront of ensuring that this is enforced by everyone involved in football.”

The reference to the FIFA president Gianni Infantino, who was re-elected unopposed at Wednesday’s congress, is significant as he told the organisation’s 211 member associations that FIFA was no longer “toxic” and corruption would “never again” be tolerated.

It has been an eventful 24 hours for Ahmad, who was sat behind Infantino when the Swiss-Italian made that speech, as he then had to chair an emergency CAF meeting to resolve the controversy surrounding the African Champions League final.

After hours of secret debate, it was decided that Morocco’s Wydad and Tunisia’s Esperance should replay the final’s second leg after it was abandoned last week when Wydad left the field following a disallowed goal.