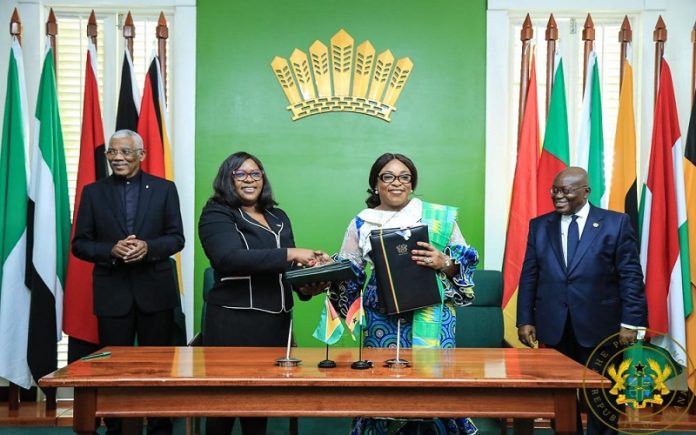 Ghana has made available free technical assistance to the Co-operative Republic of Guyana, following the discoveries of considerable deposits of oil and gas resources offshore Guyana.

Since 2018, there have been several high impact discoveries of conventional oil and gas in Guyana, with US oil giant, ExxonMobil, in February 2019, making its 11th and 12th discoveries.

Speaking at a State Luncheon held in his honour, on Tuesday, 11th June, 2019, as part of his official visit to Guyana, the President of the Republic, Nana Addo Dankwa Akufo-Addo, indicated that Ghana, following the recent discovery by Aker Energy, can now be considered as a significant player in the oil industry, having also commenced the production of oil in commercial quantities since 2011.

The President, therefore, told his Guyanese counterpart, President David Granger that “we should explore promptly the possibility of establishing a joint vehicle to assist in the effective, initial management of oil and gas revenues.”

President Akufo-Addo continued, “With our experiences, I believe Ghana is well-equipped to share with you the dos and don’ts in the area, and make available fee-free, quality technical assistance to you. Hopefully, the proper management of the new revenues will help finance the spectacular development of Guyana.”

In his remarks, the President also stressed that since the advent of diplomatic relations between Ghana and Guyana, in 1979, the two countries have not done much to create the relevant legal framework for the conduct of their bilateral co-operation.

In the course of his visit, President Akufo-Addo, thus, indicated the readiness of Ghana to deepen bilateral co-operation with Guyana in the areas of agriculture, energy, trade, and tourism.

“I am also glad to see that, on this trip, we have signed an Air Services Agreement, a Visa Waiver Agreement, and a Memorandum of Understanding on Investment, all with the view of strengthening our bilateral relations and establishing a legal framework for doing so,” he added.
With Ghana and Guyana, according to President Akufo-Ado, bonded by common blood, common geography, common history, and common ties, he noted that this imposes on the two nations the necessity to work together, with each one being the brother’s keeper.

“Being each other’s keeper means that we look out for each other, and ensure that we, descendants from the Mother Continent, never permit ourselves to be subjected to dehumanising conditions and sold into slavery. The Trans-Atlantic Slave Trade, in whatever form, should never be repeated”, he added.

President Akufo-Addo was hopeful that, under his and the tenure of office of President Granger, Ghana and Guyana would continually search for ways to co-operate.

“I have no doubt, that, together, we can forge a new, strong partnership for cooperation between our two nations for the mutual benefit of our two peoples, he added”