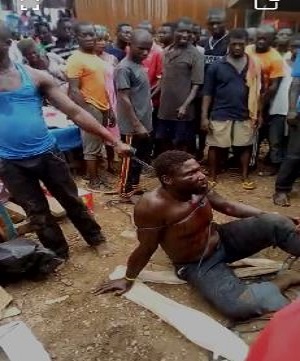 A 43-year old alleged mentally challenged man identified as Appiah Mensah Macjames has been tortured to Death by a mob at Kade in the Kwaebibirem District of the Eastern.

Efforts by Medical Doctors at Kade Government Hospital to save the victim rushed to the facility in critical condition failed as he passed on after few hours of arrival.

Information gathered indicates the incident occurred Tuesday when the deceased reportedly stormed the market area and started attacking some residents in the area.

He reportedly stabbed two persons and injured others without provocation hence was overpowered by a mob who tired his legs and both hands and tortured him. 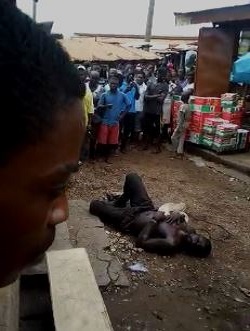 A video which has gone viral on social media further shows the deceased was stripped down to his shorts and brutalized while in chains.

A young man said to be a victim of his attack was seen hitting him several times with a stick.

The Public Relations officer of the Eastern Regional Command, DSP Ebenezer Tetteh confirmed to Kasapa News that two suspects in the video were arrested but granted bail on health grounds.

But the family of the deceased is not happy with police handling of the case.

According to the family, though the deceased has a mild mental illness he was on medication.