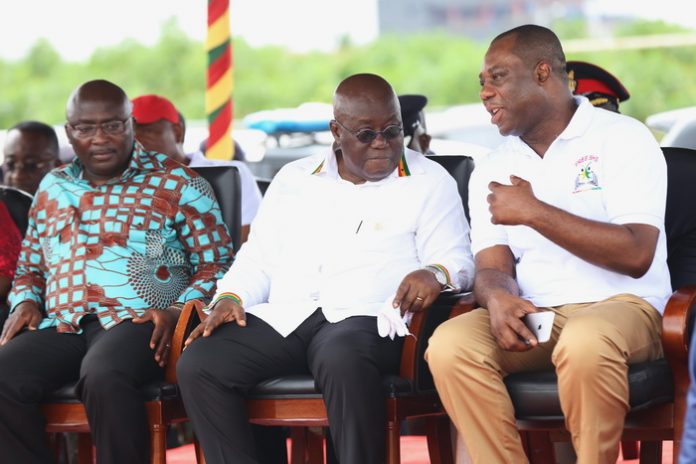 The Minister for Education, Dr. Matthew Opoku Prempeh, known in the political circles as ‘Napo’, has been ranked as the Best Minister among the 123 ministers and Deputy Ministers in the administration of the President of the Republic, Nana Addo Dankwa Akufo-Addo.

Napo in an Opinion Poll 2019 conducted by the Political Science Department of the University of Ghana scored 12.2% to beat his colleague ministers for the enviable number one position.

From the findings of the polls, Dr. Opoku Prempeh claimed the number spot with a wider margin, a little more than two folds of the score attained by the Minister for Food and Agriculture, Dr. Owusu Afriyie Akoto, for the number two position.

Dr. Afriyie Akoto who has been leading one of the government’s flagship projects, ‘Planting for Food and Jobs’, scored 5.3%.

It is not clear what informed the decision of the respondents to vote for the Minister of Education as the study was silent over that.

However, Napo and the Ministry of Education could be credited for having successfully rolled out perhaps, the most challenging policy of the Akufo-Addo’s administration – the fee-Free Senior High School (SHS) policy despite its numerous challenges.

In all, a total of 27,500 Ghanaians in five randomly selected Electoral Areas in each of the 275 constituencies of Ghana participated in the study, the findings of which was unveiled on Monday, June 10, 2019, at the auditorium, School of Law, University of Ghana.

The study themed “Assessment of 275 Members of Parliament – Perspectives from the Constituents” focused mainly on performance of the legislators both at the constituency and on the floor of the House.

However, when the respondents were asked to “mention one minister that has done well on the basis of policy and delivery, competency and hard work”, the name of the Minister for Education, Dr. Matthew Opoku Prempeh stood out.

In second position per the findings of the study was the Minister for Food and Agriculture, Dr. Owusu Afriyie Akoto who scored 5.3%.

The Minister for Health, Kwaku Agyemang-Manu placed 5th, having scored 1.9% with the Minister for Youth & Sports claiming the number 6th position with 1.8% score.

The number 10 position was claimed by the Minister for Information, Kojo Oppong Nkrumah, having scored 1.3%.