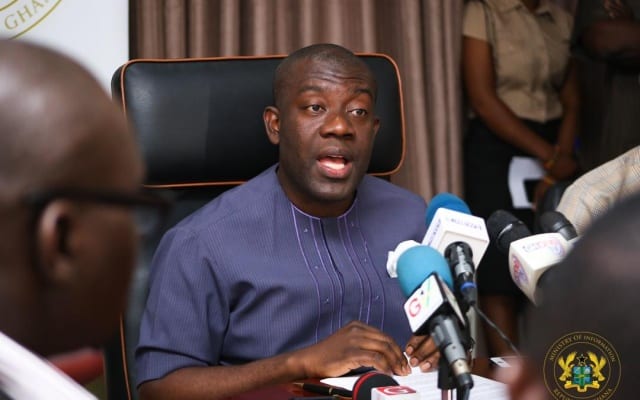 Editor -in -Chief of the New Crusading Guide newspaper, Abdul Malik Kweku Baako has defended Information Minister, Kojo Oppong Nkrumah, in the wake of attacks by a section of Ghanaians over the Minister’s comments that Ghana’s government did not negotiate for, nor make payment for the release of two Canadian nationals kidnapped last week in the Ashanti Region.

The Information Minister had stated at a press briefing last week that no ransom had been demanded by the kidnappers, nor had any such monies been paid by the Government of Ghana for the release of the two Canadian Nationals.

Speaking on Joy FM’s News analysis programme, Newsfile, Saturday morning, Kweku Baako disclosed that Information Minister, Kojo Oppong Nkrumah, spoke the truth when he said at the media briefing that no ransom had been demanded for and or negotiated by the Government of Ghana for the rescue of the two kidnapped Canadian nationals.
Detailing what really transpired, Kweku Baako said a US$800,000 ransom demand was rather made to families of the two kidnapped Canadian nationals insisting that reports suggesting otherwise were false and inaccurate.

The Editor-in-Chief of the New Crusading Guide newspaper revealed on the show that the families of the two Canadians dispatched officers of a UK based life insurance company they have been signed on to negotiate with the kidnappers on the blind side of the state and security agencies.

Abdul Malik Kweku Baako categorically stated that the officers(dispatched by the Canadians) did not even get to negotiate a release as Ghana’s security apparatus had already embarked on an operation to free the victims.

“The ransom thing, the guys as indicated communicated this to the girls’ families. That is a fact. The UK team that came in, that was widely communicated as Canadian experts, they belong to some life insurance and they had come with a mission to negotiate with the kidnappers. The girls had life insurance and this team was in charge of that so they had been asked by the girls’ families to come. There was no negotiation between the Ghana government or the Ghanaian security and the kidnappers in relation to ransom. Nothing of that sort happened. Indeed, this UK team that came that was interested in negotiating relative to anything involving ransom did not get the chance to negotiate with the Kidnappers,” Kweku Baako emphasized.

Within a week of the kidnapping of the two Canadian nationals in Kumasi, security agencies of the country had managed to locate them and rescue them from their abductors.

Speaking on the programme, Kweku Baako asserted that at no point did the Canadian officials assist the Ghanaian team in the rescue process.

Kweku Baako’s revelations go to confirm the statements made by Kojo Oppong Nkrumah, Information Minister, who stressed in a press conference, Wednesday, that the rescue operation was executed solely by a team of professional Ghanaian security officials with no intervention from external professionals.

The rescue mission, he noted, was executed by a joint team of the Ghana Police Service, Bureau for National Investigations and the counter-terrorism squad.
Kweku Baako suggested that the only official who came to Ghana from the Canadian side was the representative of the Canadian Government in charge of security within the region but based in Morocco, a day to the field operation by the Ghana Police Service thus had no input whatsoever in the process.

“The Canadian team that came is the security coordinator for Canada and he is based in Morocco. He came a day before, so he has practically no role to play and indeed when the rescue happened he was surprised and went to the national security to express his gratitude.”

“The Minister was right when he said that there were no foreign assets involved in the operations and also not involved in intelligence gathering. And that is why the Canadian government will do what they did and not us. They were showing appreciation. It is true we were not doing them a favour, we were doing ourselves to a favour, after all, our image was on the brink. So in rescuing them, we were also rescuing our own integrity as a nation” he revealed.

Six out of the eight persons arrested in connection with the kidnapping were remanded in police custody by the Accra High Court when they made their first appearance on Friday since their arrest.

The court, presided over by Justice George Buadi, remanded them for two weeks following a plea by the prosecution that investigations into the case were still ongoing.
The accused persons have been charged conspiracy to commit kidnapping and kidnapping.