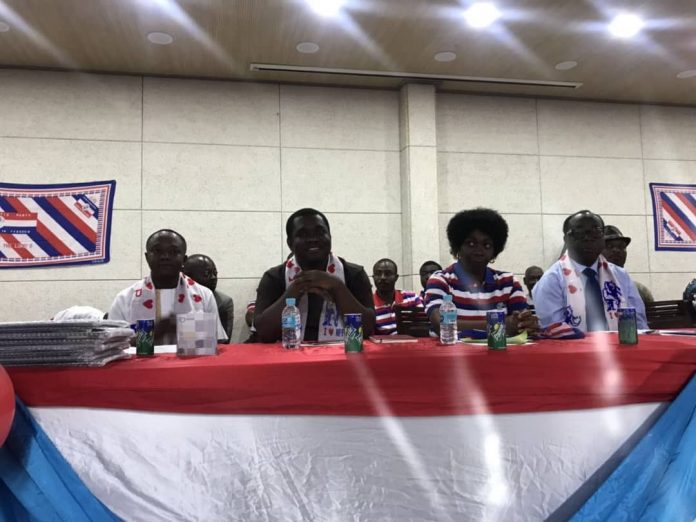 The Deputy Ambassador of Ghana to China, Dr Charles Dwamena, aka. Dr. China, has advised the newly sworn in executive members of the Korea Branch of the Party not to live in isolation and that they should at all times, work in collaboration with the other branches of the Party in the Asia-Pacific region to achieve optimum results.

Speaking at the inauguration of the Korea Branch on Sunday the 16th of June in Paju- South Korea, Dr China who is a former Chairman of the Asia-Pacific Caucus of the NPP, further tasked the executive members not to be complacent but rather work hard to ensure that the branch grows.

In her welcome address, H.E. Mrs Difie Agyarko Kusi, Ghana’s Ambassador to South Korea thanked all the party members for making it to the event and urged all Ghanaians in South Korea to take advantage of the Embassy’s registration link online to register so that they can be offered Consular assistance as and when the need arises.

Addressing the gathering, the General Secretary of the Party, Mr John Boadu, indicated that out of the over 62 years Ghana has been in existence, NPP has had the opportunity of being in office for less than 14 years yet has an enviable record of increasing the size of the economy and that there was the need for all well-meaning Ghanaians to ensure that NPP stays in power for over 16 years as that was the surest way of building Ghana.

The National Chairman of the Party, Mr Freddie Blay on his part tasked party members to work hard in anticipation of the implementation of ROPAL as there is an estimated two million eligible voters in the Diaspora.

He encouraged executive and non executive members of the party in Korea to put in the necessary measures to bring onboard majority of Ghanaians living in Korea.

Mr. Hanan Abdul Wahab, CEO of National Buffer Stock Company and Mr. Habib Iddrisu, a Director at the Free Zones Board took turns in educating the audience on various programs and policies their agencies are rolling out and encouraged them to take advantage of them.

The Director of International Affairs of the Party, Mr Attafuah-Danso, indicated that the Korea Branch is the 22nd External Branch of the Party and that plans are far advanced to inaugurate other branches in the Middle East and Africa in anticipation of ROPAL.

Other dignitaries present were the leadership of the Ghanaian Association in Korea (GHASKO) and the Ghana Students in Korea Association (GASKA).

Over 120 party members from all of South Korea were present at the event.