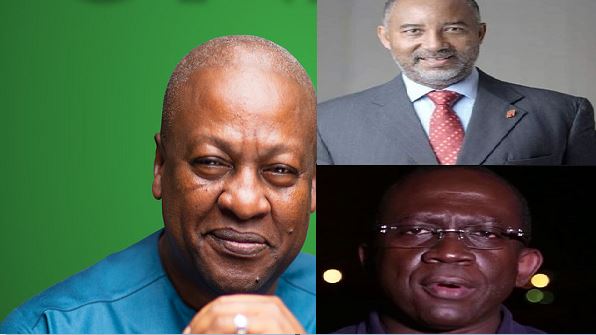 Per the latest research conducted by Ephson, these two replaced senior figures, Kwesi Ahwoi and Kwesi Botchway in a long-list of candidates that was whittled down to just five in the last four months.

“The last list that we did in February featured Kwesi Botchway and Kwesi Ahwoi. Between now and then the two seems to have dropped from the list and they’ve been replaced by Alex Mould and Awuah Darko.” he told host Kweku Owusu Adjei on Anopa Kasapa on Kasapa 102.5 Fm.

The rest are former Energy Minister, Kofi Armah Buah and Oppong-Fosu who are all from the Southern belt and Akans.

Ephson said the five would be cut to three to choose the overwhelming favourite who may have to satisfy the various stakeholders in the party, including the Council of Elders, Rawlings faction, the Mills faction and the various ethnic groups among others.

The clock is ticking and Mr Mahama doesn’t have the luxury of time to choose his running mate and hit the ground running, Ephson said.

Johnson Asiedu Nketia told host Kwaku Owusu Adjei on Anopa Kasapa on Kasapa FM that he has become aware of such report and believes he’s competent to occupy that high office but added that he wouldn’t lobby for the position.

“I’ve also seen the speculation viral on social media but I’ve not been spoken to by the Flagbearer. We don’t campaign for the running mate position, our party has a structure that is followed in selecting a running mate who will be very suitable for the position. I know I deserve that position if you ask me, but it doesn’t lie in my mouth to say it. Let’s leave that to the appointing authority.”

The Chief Scribe of the NDC, Asiedu Nketia, is thought to be in pole position for the enviable position due to his rich experience, affability and seeming ability to mobilize the grassroots as the party desires to shore up its votes in the rural communities of the country ahead of the 2020 elections.