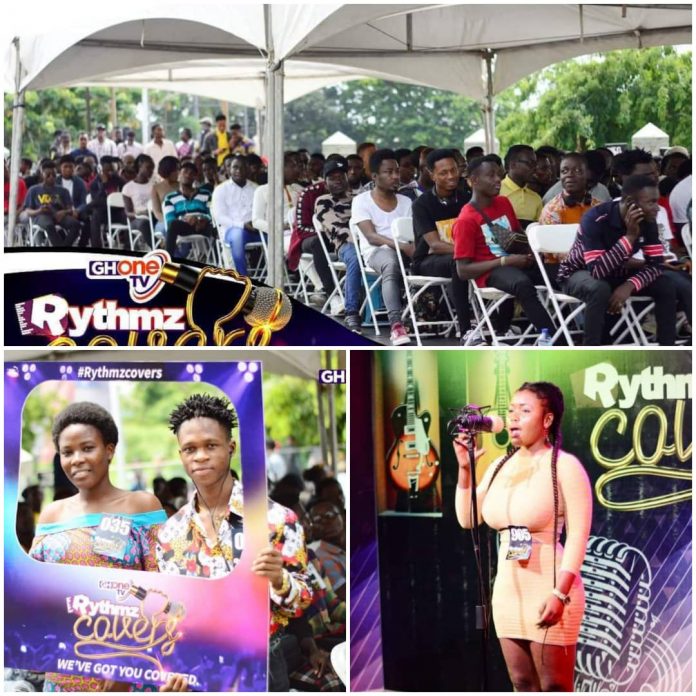 Music talent discovery show, Rythmz Covers has successfully moved into its next phase after weeks of tedious scrutiny.

Hundreds of aspiring rappers and singers thronged the studios of GHOne TV on June 15 and 16 to audition for the stations maiden season of its reality talent hunt – Rythmz Covers.

It was a plethora of talents from wonna be stars who performed to various renditions of songs as well as originals to woo the judges. Day one judges made up of gospel icon, Oheema Mercy, award-winning producer Masta Garzy and singer Wutah Kobby. Female rap artiste Eazzy joined the panel of judges in subsequent days to fulfill their tough task of selecting the best to progress to the next stage of the competition.

The second phase of the auditions was held July 13 2019 at the GHOne Tv premises with over 161 contestants in attendance. This was mainly a list of selected participants from the first stage, who auditioned and were chosen by judges. A final slot of 12 talents was arrived at from this list.

Unlike the first stage where contestants were made to sing without any instrumentals, the second stage took a slightly different twist with contestants being provided with random beats from different genres — dancehall, reggae, Afro pop, Hi-life, Hip-pop.

SELECTION
Out of over 161 contestants who were present and auditioned, the judges were able to narrow the list to 60 from which the final 12 who would subsequently be announced on July 27 to engage in the ultimate battle of who makes it to the Rythmz Covers 2019 grand finale.

The 13 weeks Reality show will see Contestants Perform Renditions of Popular songs from different Genres with 4 Contestants going into the finals.

The show promises to be very competitive, Fun and educative with loads of Activities.

According to the organizers of the program, the winner of the show will walk away with an undisclosed amount of cash prize, a record deal and endless airplay on GHOne TV.