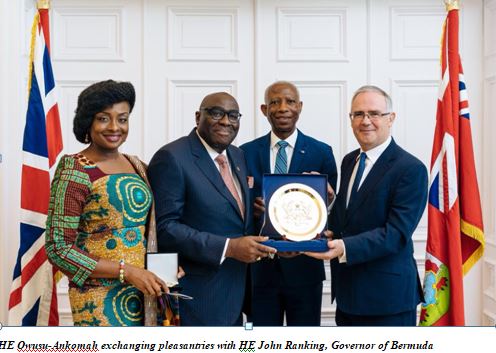 Ghana’s High Commissioner to the United Kingdom & Republic of Ireland, His Excellency Papa Owusu-Ankomah has paid a historic official visit to Bermuda to, as part of the High Commission’s core mandate, explore business opportunities and deepen the bilateral relationship between the two countries.

The visit is the first of its kind by an African Ambassador or High Commissioner accredited to the Court of St. James’s to the oldest self-governing British overseas territory in the western North Atlantic Ocean.

Bermuda has one of the highest per capita income in the world, which is mainly fuelled by offshore financial services for non-resident firms, especially in the areas of insurance and reinsurance. Bermuda is also noted for its tourism and for being the 3rd largest market for re-insurance after New York and London. The Island is also becoming a major hub for data storage in the world.

In September 2012, Dr. Leonard Teye-Botchway, a Ghanaian Eye Surgeon and Medical Director of the Bermuda International Institute of Ophthalmology, was commissioned as the Honorary Consul-General to Bermuda and this marked the first-ever Honorary Consulate of an African nation on the Island. Over the years, there has been a considerable number of Bermudians who have visited Ghana mainly for tourism, charitable, religious and educational activities.

During a courtesy call on H.E. John Rankin, the Governor of Bermuda, at the Government House, the High Commissioner conveyed special greetings from H.E.

Ghana and Bermuda which sets the stage for a mutually beneficial economic engagement.  H.E. Papa Owusu-Ankomah pointed out that Ghana is on the path of digitisation and industrialisation and called on the Bermudian business community to partner their Ghanaian counterparts.

The Governor pointed out that he was extremely pleased with the visit and urged both countries to explore opportunities in the fintech and financial sectors. He commended the Ghanaian community in Bermuda for their exemplary and active involvement in the development agenda of the Island. 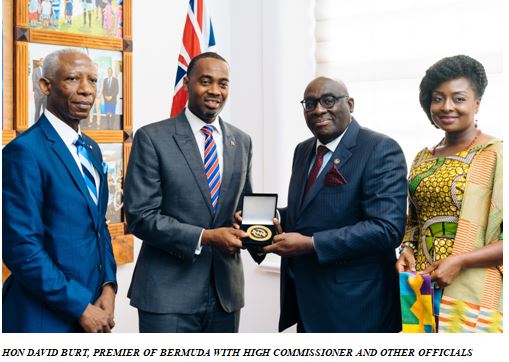 H.E. Papa Owusu-Ankomah also paid a courtesy call on Hon. David Burt, the Premier of Bermuda at the Cabinet Building. The Premier underscored the significance of the visit and commended the Government and People of Ghana for championing the diaspora re-integration.

Hon. David Burt emphasised his Government’s commitment to deepening bilateral relations with Ghana. He added that his Government is working to diversify the Bermudian economy and unearth new streams of economic activity and one such avenues for economic diversification has been to build on the strength of Bermuda in financial services – to establish a fintech ecosystem that is best in class and which would attract fintech companies to domicile in Bermuda. The Premier pointed out that Bermudians, with other international partners, have deployed a Blockchain technology to drive modern financial transactions.

Hon. Burt underscored the focus of his Government in building a Bermuda that is fair, inclusive and accessible, where every citizen has an equal opportunity to earn a living, with a decent job opportunity, build a career, develop a business and grow wealth; regardless of race, creed, colour or legacy.

H.E.Owusu-Ankomah applauded the Premier and his team and highlighted some of the economic developments of the Ghana government. The High Commissioner reiterated his call for Bermudians to explore joint ventureships with and partner Ghanaians in the areas of mechanised agriculture, agro-processing, re-insurance and other sectors of the economy. On export of agricultural produce to Bermuda, the High Commissioner was convinced that given the enormous opportunities in the production of organic products from Ghana, this could be one area that both countries could explore.

The Premier and the High Commissioner agreed that there was urgent need to address easy movement of people, goods and services within the two countries. Another area of cooperation that came up for discussion was the recruitment of professional health workers, artisans and other specific technical workers. 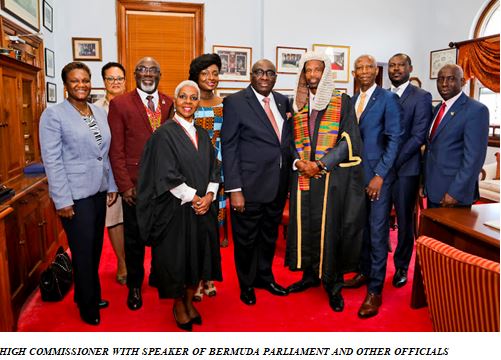 The Hon. Dennis Lister, JP, MP, the Speaker of the Bermudian Parliament welcomed H.E. Papa Owusu-Ankomah and his entourage to witness proceedings of the House. The Hon. Speaker also invited the High Commissioner to his Chamber where the two held mutually beneficial discussions. 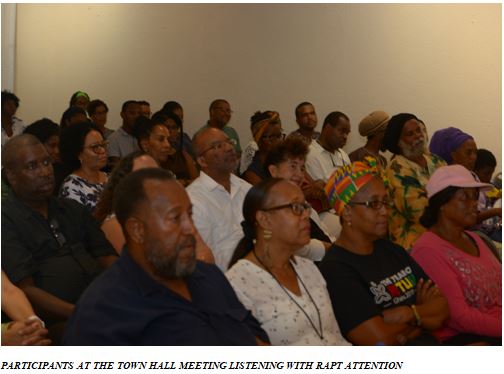 In a town hall meeting made up of Ghanaians, other Africans, Bermudians and Caribbean citizens, the High Commissioner had the opportunity to invite all to visit Ghana as we celebrate the ‘Year of Return’ and explore the enormous business opportunities.

At a business lunch organised by the African Group based in Bermuda, H.E.Owusu-Ankomah urged the group to use their unique positions to market Africa as the next frontier for business. He also emphasised that most African countries are building a competitive business environment that is attracting some of the world’s top multinationals in almost all sectors of the economy. He also touched on the African Continental Free Trade Agreement which is going to be the game changer for Africa and encouraged the group to take advantage of the opportunities that the single market will provide.

The visit was facilitated by Dr. Leonard Teye-Botchway, Ghana’s Honorary Consul- General to Bermuda and assisted by Nana Otu Turkson, a Ghanaian national who is a Surveyor and Barrister at the Bermuda Ministry of Public Works.

Be influencers in Ghana – Owusu-Ankomah woos young Ghanaians in UK