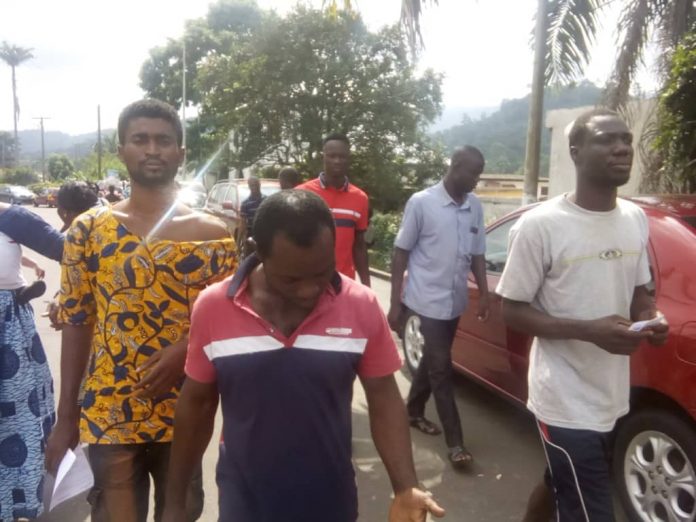 Three passengers on-board a commercial vehicle from Accra to Anyinam had a shock of their lives Monday, July 15, at about 7:30pm when six persons reported to be National Security Operatives from Kyebi violently arrested and placed them under detention at the Okyenhene Palace for allegedly insulting Osagyefo Amoatia Ofori Panin over the  destoolment of  the Chief of Akyem Hemang.

The swift intervention by the Kibi Police saved the victims. They are Gabriel Opppong, 25, Frimpong Patrick, 30 and Jacob Arhin, 21.

The three who sustained various injuries have since been detained at the Kibi Police Cells and issued Police medical forms.

The driver in Charge of the vehicle, one Ofori told Starr News the victims and passengers in the vehicle were discussing 6pm news item on the protest held by residents of Akyem Hemang over illegal mining and its related destoolment of their Chief.

He said while the issue was being discussed, it became heated where the passengers condemned Okyenhene for unfairly destooling the Chief of Hemang whom they say is protecting the environment.

But while the debate was ongoing, a lady identified as Suzzy Oweriedu who hails from Kyebi placed a phone call to inform some unknown person that some of the passengers were insulting the Okyenhene.

The six persons believed to be National Security Operatives on board a Toyota Camry Car met the passenger vehicle which was entering the Kyebi township, stopped the vehicle and allegedly started assaulting the victims who were pointed out by the informant.

The victims say they were kicked, slapped and lashed. According to them, their Mobile phones, monies and other personal belongings were stolen from them.

The driver said he drove to the Kyebi Police station where he lodged official complaint upon which the Police swiftly rushed to the palace to rescue the victims.

Suzzy Oweriedu, the complainant told the Police that the suspects were insulting Osagyefo Amoatia Ofori Panin in that vehicle. They said “Nana is stupid,”.