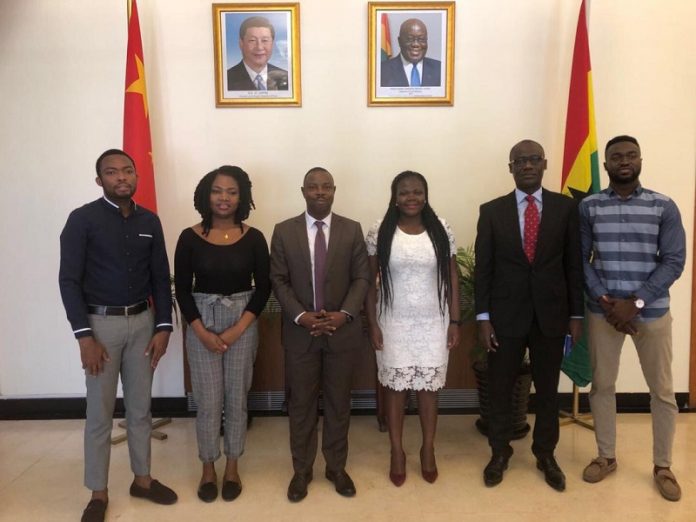 At the last General Meeting for the 2018/2019 academic year held at Ghana’s Embassy in Beijing on 23rd June 2019, the elections were held and managed by the union’s Electoral Commission in accordance to its constitution.

Timothy Kwakye Karikari; a PhD Candidate in Business Management at the University of International Business and Economics emerged as President of the Union and Mr. Mwin-Nia Saan-ye Zumakpeh; an MSc student in Actuarial Science and Risk Management from the same university emerged as Vice President.

The General Secretary position was won by Aduko Bukari Lardi, a Masters student in Chinese Economy at Renmin University of China whilst the Financial Secretary position was won by Sebastian Gadah Besa; A Masters in World Economics student at Beijing Normal University. Saaka Latifatu; an MBA student at North China University of Technology was elected as the Women’s Commissioner for the union.

Speaking to the media on behalf of the new leadership team, Timothy Karikari expressed delight and honour for the opportunity to serve the union and mother Ghana and pledged their commitment to the promotion of Ghana’s image in China and the protection of the interest of all members of the union.

He added that, even though China and African countries had many differences such as the former being a country and the latter being a continent with different countries, governments, laws etc., African countries could study China’s impressive growth and development agenda and compare with others from Western countries, take note of strategic and applicable ones that are suitable and modify them to ensure they suit our individual needs including culture and history.

In his opinion, China is successful because they did not just copy a development model but rather, they tweaked the model to suit their unique situation. He said “scholars and experts refer to China’s model as Socialism with Chinese Characteristic. Why do you think it is so? It is because China’s socialism has a bit of capitalism and other differences that does not make it straitjacket socialism. They did not just follow a model, they modified it to suit their unique identity”.

Commenting on the prospects of studying in China, he believes studying in China in this critical time of Africa’s development trajectory is strategic because many African countries are increasingly engaging with China and therefore require specialist advise, skills and support from persons with the know-how on the Chinese practice. He said, “China is Africa’s largest trading partner and initiatives such as the Forum for China and Africa Cooperation, the 1st China-Africa trade expo and others continue to strengthen the relationship.

Again, many African countries have plans to industrialize with Ghana’s flagship One District One Factory (1D1F) policy being an example of how African governments are aggressive to develop through industrialization and value addition to resources. We also see more and more Chinese showing interest and doing business in Africa. An opportunity therefore exists to play a part in this booming relationship whether at the academic level, advocacy level, government level or enterprise level. Global agencies are also interested in this new trend and therefore require the services of competent people for research, policy etc. Studying in China and if possible, acquiring the language and culture would be beneficial in the long term.”.

Second to France, China is the second most preferred destination for African international students, a position previously held by western countries. Whilst the increasing trend in enrolment numbers could be due to affordable tuition and cost of living in China, dynamic engineering programmes and scholarships, many analysts equate this to the growth of China’s partnership with Africa spearheaded by the Forum for China and Africa Cooperation (FOCAC).