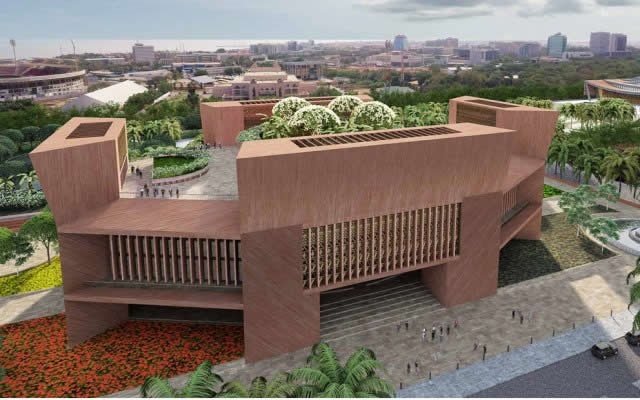 The Parliamentary Service Board will on Monday, July 8, 2019, hold a crunch meeting over the controversial proposed new chamber block for the legislature.

The meeting, according to inside sources, is to bring finality to the edifice which has attracted a lot of bashing from the public.

The design was done by Adjaye Associates, one of the three architectural firms, that won the bid for the works on the new Chamber.

The commencement of the monumental edifice will take twenty four (24) months to be built, according to Sir David Adjaye, the Principal Architect of Adjaye Associates.

The monumental project which comprises of a library, a chapel, mosque, hotel, restaurants, eating places and ancillary facilities will have enough spaces for the media to operate without difficulties.

However, the proposed new chamber did not go down well with majority of Ghanaians, many of who insist it is a misplaced priority.

The Parliamentary Service Board meeting, our sources say, will consider the various arguments the public have raised and take a final decision to resolve the crisis it has brought about.

Our sources further told us that they will not be surprised if the Parliamentary Service Board, for now, drops the idea of constructing a new chamber and further engage the public over the edifice.

The proposed new chamber block is the main subject of discussion following which other matters will be considered, according to our sources.

Parliament is expected to issue a press statement moments after the crunch meeting.

The Parliamentary Service Board is Chaired by the Speaker with the Majority Leader, Osei Kyei-Mensah-Bonsu, Minority Leader, Haruna Iddrisu and Atiwa East MP and deputy Minister of Finance, Abena Osei-Asare as Members.

The other Members are Hackman Owusu-Agyemang and the Clerk of Parliament, Emmanuel Anyimadu. Mr. Matthew Abrefa Tawiah serves as Secretary to the Parliamentary Service Board.

#DropThatChamber Soldier release not enough; his rank must be restored – Group