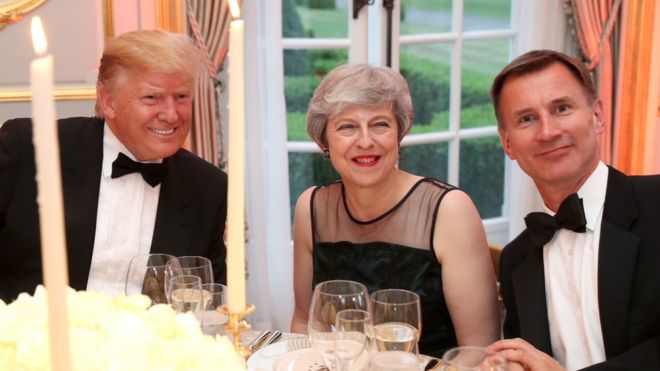 Donald Trump has been “disrespectful” towards the prime minister and the UK, Foreign Secretary Jeremy Hunt has said.

His comments come after President Trump called Sir Kim Darroch, the UK ambassador to the US, “a very stupid guy” amid a row over leaked emails.

He went on to criticise Theresa May over Brexit, saying she had ignored his advice and gone her “own foolish way”.

On Sunday emails revealed the ambassador had called the Trump administration “clumsy and inept”.

Meanwhile, International Trade Secretary Liam Fox’s scheduled meeting with the US Commerce Secretary Wilbur Ross in the US was cancelled on Tuesday.

Mr Hunt responded to Mr Trump’s latest outburst by tweeting: “Friends speak frankly so I will: these comments are disrespectful and wrong to our prime minister and my country.”

The Tory leadership hopeful also said he would keep Sir Kim in his post until he retires at Christmas.

During a televised debate, Boris Johnson, the current Tory leadership frontrunner, was pushed on whether he would keep the ambassador, but said he “wouldn’t be so presumptuous” as to think he would be in a position to do that.

Mr Johnson said he had “a good relationship” with the White House and that it was important to have a “close partnership” with the US.

1/2 @realDonaldTrump friends speak frankly so I will: these comments are disrespectful and wrong to our Prime Minister and my country. Your diplomats give their private opinions to @SecPompeo and so do ours! You said the UK/US alliance was the greatest in history and I agree… https://t.co/hNeBWmyyVN

2/2…but allies need to treat each other with respect as @theresa_may has always done with you. Ambassadors are appointed by the UK government and if I become PM our Ambassador stays.

BBC political editor Laura Kuenssberg said the row was a reminder of the “tricky and sensitive” nature of the UK’s relationship with the US and the challenge facing the Tory leadership hopefuls in dealing with a president “who seems to love stirring up controversy”.

“It’s Jeremy Hunt, normally seen as the more cautious of the two, who’s speaking much more plainly and directly to Donald Trump on the matter, while Boris Johnson has said only that he’s not embarrassed about being close to the White House,” she said.

Following Mr Trump’s comments on Monday that the US would “no longer deal” with Sir Kim, the US State Department said it would continue “to deal with any accredited individuals until we get any further guidance from the White House or the president”.

“We have an incredibly special and strategic relationship with the United Kingdom that has gone on for quite a long time – it’s bigger than any individual or government,” the department added.

A spokesman for Theresa May said that Sir Kim is “a dutiful, respected government official” and confirmed there were no plans for Mrs May and Mr Trump to hold a call to discuss relations following the leak.

Number 10 also confirmed that Sir Kim would not be attending a meeting between Ivanka Trump and the International Trade Secretary Liam Fox in Washington.

The spokesman said: “He isn’t attending that meeting but he is supporting Liam Fox in other ways on his trip.”

Earlier on Tuesday Mr Trump tweeted: “The wacky Ambassador that the U.K. foisted upon the United States is not someone we are thrilled with, a very stupid guy.

“He should speak to his country, and Prime Minister May, about their failed Brexit negotiation, and not be upset with my criticism of how badly it was handled.

“I told @theresa_may how to do that deal, but she went her own foolish way-was unable to get it done. A disaster!

“I don’t know the Ambassador but have been told he is a pompous fool. Tell him the USA now has the best Economy & Military anywhere in the World, by far…and they are both only getting bigger, better and stronger…Thank you, Mr. President!”

The wacky Ambassador that the U.K. foisted upon the United States is not someone we are thrilled with, a very stupid guy. He should speak to his country, and Prime Minister May, about their failed Brexit negotiation, and not be upset with my criticism of how badly it was…

Number 10 previously called the leak, reported in the Mail on Sunday, “unfortunate” and has begun a formal investigation. It said the UK and US still shared a “special and enduring” relationship.

Confidential emails from the UK’s ambassador contained a string of criticisms of Mr Trump and his administration, and said the White House was “uniquely dysfunctional” and divided under his presidency.

Sir Kim, who became ambassador to the US in January 2016 about a year before Mr Trump took office, also questioned whether the White House “will ever look competent” but also warned that the US president should not be written off.

The emails, dating from 2017, said rumours of “infighting and chaos” in the White House were mostly true and policy on sensitive issues such as Iran was “incoherent, chaotic”.

US ELECTION: Biden vows to end Trump’s ‘season of darkness’

US Election 2020: Biden crowned as Democratic challenger to Trump