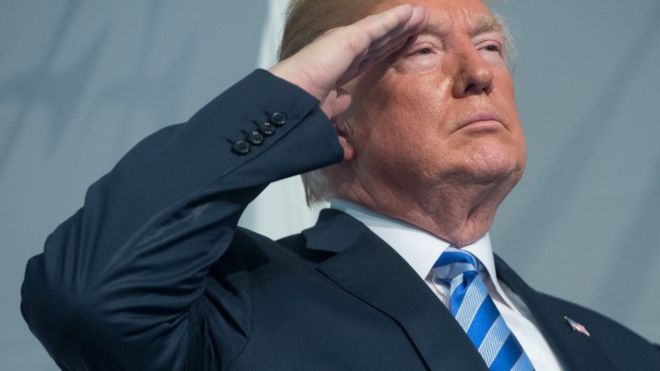 In a move that will likely embolden President Donald Trump’s claims that social media companies are biased against him and his supporters, Twitter suspended an account Tuesday evening that the President had retweeted just hours earlier.

Trump retweeted a post from an account operating under the name “Lynn Thomas” that accused Democrats of being “the true enemies of America.” The account, which created in September 2018, described itself as a “Fierce Trump supporter” and declared: “I’m not a bot.”

Just a few hours later, Twitter had suspended the account, confirming to CNN it had broken the platform’s rules. The company did not say what rules the account had broken.

In an interview with C-SPAN set to air Tuesday night, Trump said he has “not much” regret when it comes to the tens of thousands of tweets he has sent, but he also acknowledged that it can be an issue when he retweets other accounts.

“The bigger problem are the retweets. You’ll retweet something that sounds good, but it turned out to be from a player that’s not the best player in the world, that sort of causes a problem,” he said.

Explaining his use of Twitter, Trump called it an “incredible way of communicating,” as well as a way to combat negative coverage.

Earlier this month, Trump invited a cadre of rightwing internet personalities to the White House for a “social media summit.” There the President bemoaned Silicon Valley’s purported bias against him and his supporters

He claimed that Twitter was making it difficult for people to follow him on the platform, saying at the time,”People come up to me: ‘Sir, we want to follow you; they don’t let us on.” He added later: “I have millions of people, so many people I wouldn’t believe it, but I know that we’ve been blocked. People come up to me and they say, ‘Sir, I can’t get you. I can’t follow you.'”

There is no evidence, as CNN has previously reported, that Twitter or other social media companies have made it difficult for people to follow Trump.

And when Trump recently used racist language to attack four progressive Democratic congresswomen of color, a Twitter spokesperson told CNN that the President’s tweets were not against its rules — a conclusion apparently contradicted by Twitter’s written policies.

N Korea: We won’t move on talks with Trump