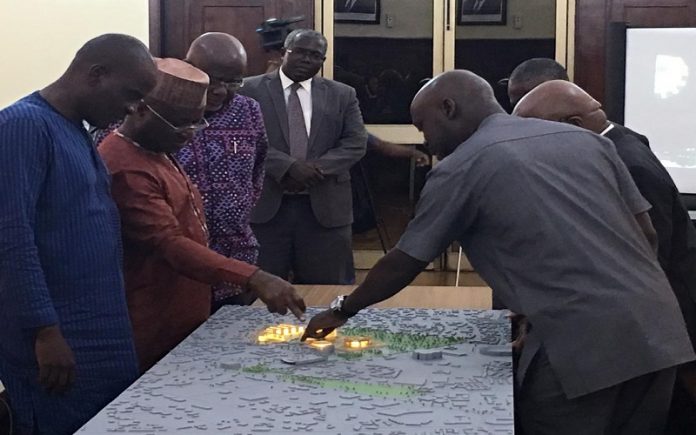 The Majority Leader and Minister for Parliamentary Affairs, Hon. Osei Kyei-Mensah-Bonsu, has said under no circumstances will the legislature force the proposed new chamber block, which has become a subject of controversy, on the people that elected them.

“We can’t force anything on the public. If the public says for the time being we should shelve it, why not? After all, they elected us and we must listen to them”, he told a press conference in Accra, Thursday, amidst public bashing of the proposed new chamber block for Members of Parliament.

The construction of the proposed new chamber block is expected to begin before the end of 2019.
Speaker of the House, Rt. Hon. Prof. Aaron Michael Oquaye, said last Friday after outdooring the architectural design of the new chamber block that Parliament will not tolerate the project cost to go beyond US$200million.

Renowned Ghanaian architect, David Frank Adjaye, designed the model and took members of the House through it last Friday.

He told the media that the project will be completed in three years if it begins before the end of the year.

The new chamber will be a multi-purpose building with a chapel, mosque, eatery and a museum.

Ever since the announcement, the law making body and its members have received public bashing despite some few MPs coming out publicly to kick against the project meant to provide them some comfort.

However, Kyei-Mensah-Bonsu in his address, apologized to the public and his colleague MPs for not engaging them before announcing the project to the citizenry.

He expressed the hope the narrative will change now that he has provided detailed information about the project.

The Majority Leader told journalists who covered the event which was aired live on some television stations across the country that the idea for the new chamber block was not from the Executive but rather the Parliamentary Service Board after considering the state of the current chamber.

“This has nothing to do with the Executive. It is the Parliamentary Service Board that is considering a new chamber block for Parliament”, he noted.

According to Kyei-Mensah-Bonsu, discussions for the proposed new chamber block started when the Vice-President of the land, Dr. Mahamudu Bawumia visited Parliament two years ago to assess the level of damage caused on the current chamber block after Accra was hard-hit with torrential rains that displaced thousands of people and destroyed several properties.

But prior to that, he said the idea for a new chamber date back during the days of then Speaker of the House, Justice Joyce Adeline Bamford Addo, when Parliament secured a land at Trassaco Valley for the Parliamentary Enclave which will comprise a new chamber block and some other facilities.