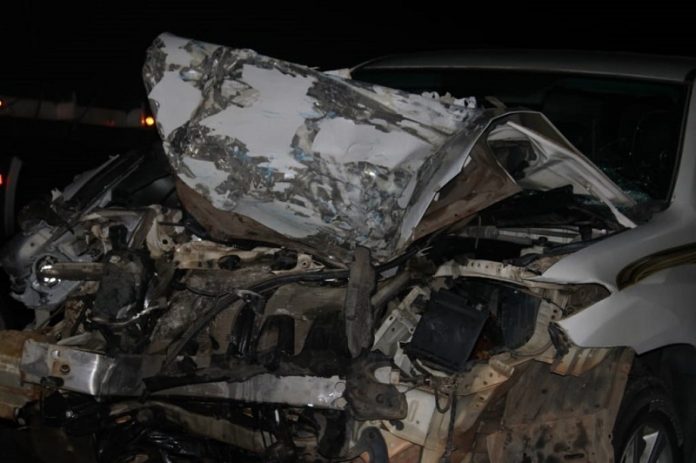 Four persons are feared dead in a gory accident on Nsawam stretch of the Accra to Highway.

The accident occurred on Sunday night. Information on the accident is very scanty, but one of the cars has inscription “Songhai Empire”

Meanwhile, the Leader of Wonderful Miracle Church at Odumasi Krobo, Cardinal Prophet Dr. Elijah Saint over the weekend stormed accident-prone Asitey curve stretch of the Odumase to Otorkpolu highway to perform spiritual pacification to end the incessant fatal accidents on that portion of the road.

He claimed the decision was upon the direction of God which he defied thrice but commanded by God during His fourth voice heard to perform the rituals.

The action of the “Man of God” shocked many as its attracted community members and commuters to catch a glimpse of the rituals he was performing.

In June this year, a Daewoo bus with registration number GV 2497—14 owned by the Volta River Authority (VRA) aboard with 61 parishioners including the nursing mother and the child had returning from a funeral ran into a ditch killing 7 of them at the spot.

While the accidents have been blamed on mechanical, and human errors, as well as engineering defects of the road, the Spiritual leader of the Wonderful Miracle Church, believes it is spiritual.