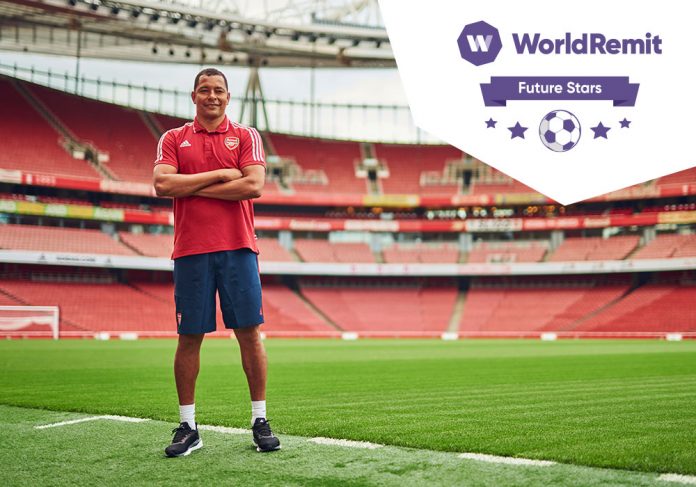 Two community football coaches, one male and one female, will attend an exclusive training programme with Arsenal Football Development coaches in London.

Arsenal and online money transfer service, WorldRemit, are offering one male and one female football coach from Africa or the Americas the chance to attend an exclusive training programme with Arsenal Football Development coaches in London.

Now in its second edition, the “Future Stars” programme was developed by WorldRemit and Arsenal to celebrate the positive impact that grassroots youth football coaches have on their communities, helping the children they train to develop life skills both on and off the pitch.

Future Stars is free to apply for and open to youth team (under 16s) coaches from across Africa and the Americas. WorldRemit will sponsor two winners, one male and one female, to fly to London for a personalised coaching programme with Arsenal Football Development coaches. Through the programme, 20 shortlisted coaches will be rewarded with Arsenal shirts for their youth squad.

Entries are now open on www.futurestars.worldremit.com or via a chatbot on the WorldRemit Facebook page until 4 September. To enter, coaches simply need to complete a short application form explaining why they deserve to be granted this unique training opportunity and how they would use it to build a lasting legacy of positive change through football.

Andrew Stewart, Managing Director for Africa at WorldRemit, said: “Our customers work hard every day to send money home to support their communities. Inspired by them, we developed the Future Stars programme with Arsenal to shine a spotlight on youth community coaches who use their passion for football to build a better future for others.

“The standard of applications for last year’s programme exceeded our expectations. We’re excited to build on this success and celebrate the incredible contributions of male and female coaches from across Africa and the Americas.”

Simon McManus, Head Coach at Arsenal Football Development said: “Community engagement has always been at the heart of everything we do and we continue to work hard to promote greater levels of participation in sport, both in north London and around the world.”

“The Future Stars programme is all about recognising youth coaches across Africa and the Americas who bring communities together and are changing lives through football. We are looking forward to celebrating them and welcoming the two winning coaches to train with us at the Emirates!”

Hamisi said: “Training with Arsenal Football Development was the opportunity of a lifetime. For my own coaching, it was amazing to hear about the Arsenal coaching philosophy and how it can bring teams of all levels together. The exchange of ideas and practices is beneficial for both sides and leads to a higher standard of football at a grassroots level. Good luck to this year’s Future Stars!”

The Future Stars competition started on Wednesday 14 August and applications will be accepted via the website until 23:59 BST on Wednesday 4 September 2019.

Arsenal is one of the leading clubs in world football with a strong heritage of success, progressive thinking and financial stability.

The club was founded in 1886 in Woolwich, south London, before moving to Highbury in north London in 1913. We moved to Emirates Stadium in 2006.

The Arsenal Foundation uses the power of football and the Arsenal name to inspire and support young people in north London and across the globe. The Arsenal Foundation raises funds each year and works with a number of key partners including Save The Children, Islington Giving, Willow and the Gunners’ Fund. Locally, Arsenal in the Community has delivered programmes to drive positive social outcomes for more than 30 years.