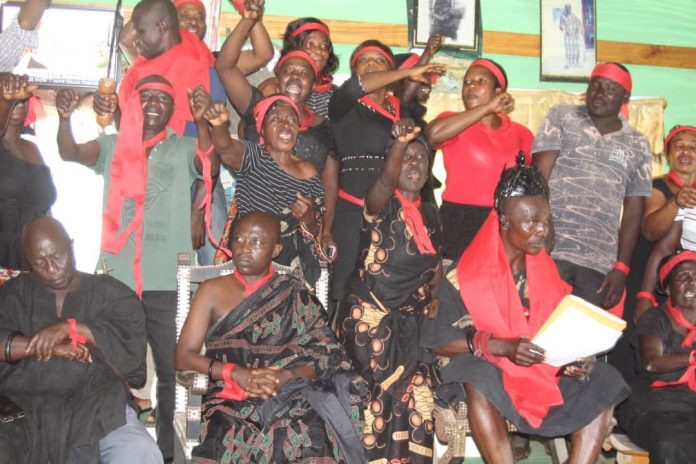 There is growing tension in Asamankese in the Eastern Region as a feuding faction in a protracted Chieftaincy dispute is threatening to invade the palace to violently eject occupant of the stool ,Osabarima Adu Darko III claiming” he is not legitimate Chief to celebrate alien Obodwan festival” recently launched”.

Addressing the media, the Chief of Aworasa in the Asamankese traditional area, Barima Pobi Asomaning ,said they have been patient enough respecting the ruling by the Judicial Committee of Akyem Abuakwa and Koforidua High Court which declared the Asamankese stool as vacant.

He claimed the current occupants of the stool defied the court order after the court held that none of the parties should occupy the stool until the right traditional processes are followed to enstool a substantive Chief.

Barima Pobi Asomaning said the Abrade Royal Family believes in the rule of Law hence has not taken the laws into their hands expecting that the Gyaasehene who is the Regent will initiate processes for the installation of substantive Chief of Asamankese.

However, he said instead of the Gyaasehene protecting the stool, he rather allowed Osabarima Adu Darko III to occupy the Palace.

This, he said will no longer be tolerated calling on the Interior Minister and the Security Agencies to intervene to ensure the Palace is locked up to avert any violence.

“I am calling on the government our President Nana Akufo Addo,the Interior Minister to ensure that the Palace is locked up. Asamankese is a peaceful town and we wouldn’t want repetition of Bawku Chieftaincy violence here but if nothing is done we shall invade the palace with our men.We are getting to election year we wouldn’t want the country to waste money on violence hence our call to government”

Meanwhile the spokesperson of the Chief ,Enoch Ansah told Kasapa News the festival is alien to the tradition of Asamankese which the Abrade Royal Family has vowed to stop it from being celebrated on Asamankese Land.

The Municipal Chief of West Akyem, Seth Oduro Boadu, who is head of the Municipal Security Council told Kasapa News, the Assembly has received a letter from the Oseawuo Division of Akyem Abuakwa traditional Council affirming the legitimacy of Osabarima Adu Darko III who is due to be gazetted.

He however added that MUSEC is always ready to maintain law and order in the municipality. – Kojo Ansah