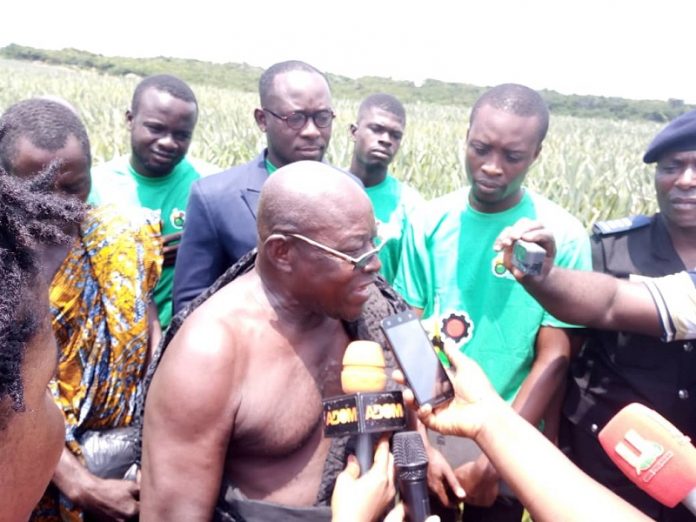 The Paramount Chief of the Ekumfi Traditional Area, Nana Akyin VIII has vowed to sack his chiefs from his palace if they fail to cultivate pineapples to support the Ekumfi Pineapple Factory.

He explains that the drastic measure is the surest way the traditional Council could help in the sustenance of the new factory.

He indicated that chiefs who fail to contribute to the sustenance of the factory will indeed be prevented from attending traditional Council meetings at the palace as they would have failed as role models to the youth in encouraging them to take to farming thereby contributing to the raw material base of the factory.

He indicated that the people of Ekumfi will not want the new factory to be starved of the needed raw materials leading to its collapse as has been the fate of the Komenda Sugar factory.

Addressing the media at the backyard of his palace where he has cultivated a 20 acres pineapple farm to support production at the Ekumfi Pineapple factory, Nana Akyin VIII, stressed that indigenes and traditional leaders participation in the activities of the factory is necessary to motivate the people to grow more pineapples to feed the factory.

“If the people see that their leaders have taken interest in the farm and therefore are cultivating pineapples to feed the factory, the locals will also be motivated to do same to feed the new factory. Jobs will be created and vices will go down,” he added.

He indicated that he has made available 200 acres land to aid every individual including the subchiefs who would want to take to pineapple farming to support production at the pineapple factory.

” We have seen how the Komenda Sugar Factory has gone down due to the absence of raw materials to feed the factory. We the people of Ekumfi don’t want same to happen to our new pineapple factory here which is set to process pineapples soonest and create jobs for our people. And that is why we the chiefs must lead the agenda for the factory to survive” he stated.

He emphasized that every head of a family is also mandated to release lands to members who are ready to take to farming so as to feed the factory and also to create job avenues for the unemployed in the area.

” All heads of family per our last meeting with them are also expected not only to own pineapple farms to feed the factory but also to release lands to all family members who want to go into farming and we will apply the apppropriate sanctions if they fail to do so” he stated.

The National Coordinator of the I-District-I-Factory Project Madam Gifty Ohene Konadu who was touring the new pineapple factory lauded the initiative of the Ekumfi Traditional Council led by the paramount Chief Nana Akyin VIII, in taking a keen interest in the activities of the pineapple factory which is set to start full-scale operations.

She also appealed to chiefs in other parts of the country to take a cue from the Ekumfi chiefs not only by making lands available to support such factories but also directly get into farming to encourage their subjects to do so thereby providing more raw materials to feed such factories being established in their enclaves.

” The example of the Ekumfi Chiefs is laudable and must be encouraged across the country. This will indeed add to the raw material base of the factories as a lot of the indigenes will be encouraged to take to farming to support the factory per the example of their chiefs and thereby create job opportunities for themselves and others too” she stated.