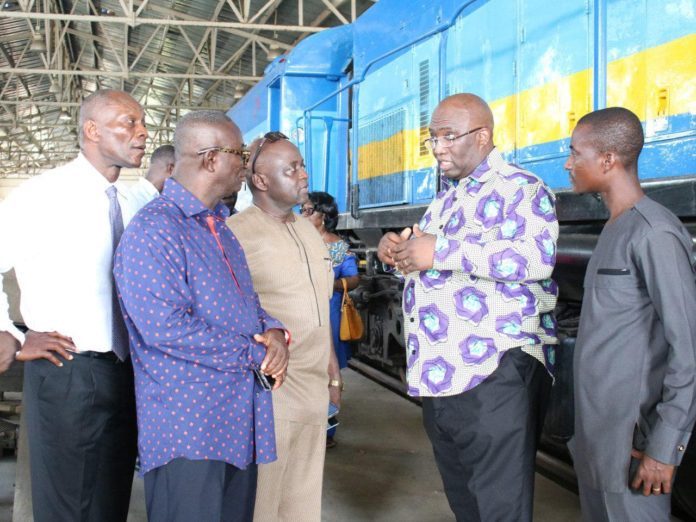 The Minister of Railways Development Joe Ghartey has issued an ultimatum to the directors and workers of the Ghana Railways Company Limited to ensure the Railways is extended to Tarkwa as promised by end of October or lose their jobs.

The rehabilitated Training School of Ghana Railways at Ketan, a suburb in Sekondi will soon be operationalised.  The Railways Minister entreated the Railways Officials to ensure the rail lines are extended from Manso to Tarkwa by October this year else heads will roll. He revealed how enough incentives have been provided by the ruling New Patriotic Party (N.P.P) Government for the Railways officials and workers to realize a promise they made 2 years ago

“We tasked the Railway Company and they gave us a promise that they will get to Tarkwa 2 years ago; if by the end of September I do not see anything positive that they will reach Tarkwa by end of October, then heads must roll. Somebody is not doing his work….we have to crack the whip…about 8 of their engineers just got back from China, we have 15000 slippers, government has put about 105 million ghana cedis into the Railway Company ,…we have employed about 300 more people, their salaries have just been increased about 20 percent, so they have no excuse , they have to deliver ..am giving them September to complete Nsawam , after they must move their men to this line(Western line) ; within 30 days from the day that they reach Nsawam, I will come and inspect this line and I will make my recommendations if am not satisfied with their work,” the Railways Development Minister instructed.

He revealed that there is a need for a very diligent work to be done to extend the tracks to Tarkwa promising to ensure to double up their efforts to meet the ultimatum set by the sector minister.

“…he has given us some timelines, it is time now for all of us get on the tracks and make sure we meet it..when your boss says something and you know you can deliver, you have to deliver.,” he said.

The Deputy Managing Director of Ghana Railways, however, said their challenge is ensuring the perfection to run a passenger service as it is not the same as running a freight.

“with the freight even when the wagons are dancing, you do not have much of a problem; but when you sit in a train and it is yawing as we call it in railway parlance; swaying left and right you would not enjoy the ride so we need to do a more details work in terms.of cross levels to make sure when you sit in the train you can ride comfortably…so.all we need to.do is double up and meet his timelines; ” he added.

He revealed that over 300 young graduates have been employed to undertake the resuscitation of the railways as envisioned under the ruling N.P.P .government.

The Railways Workshop has also seen a refurbishment by Rolider Construction Limited that also involves the rehabilitation of 7 workshops with 2 completed.

As part of the contract; Rolider Company is constructing a 1.7-kilometer storm drain that will protect properties of the Railway Company and residents around Baabakrom; Bakado and surrounding suburbs in the adjoining areas of Ketan in Sekondi. The places often get flooded anytime it rains.

Ofori-Atta, Amewu must resign or be sacked over PDS scandal – NDC demands